Thorsby moves on to 2nd round of playoffs 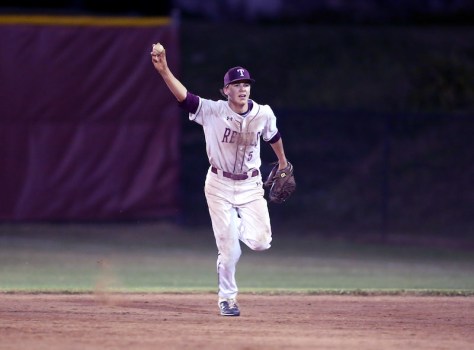 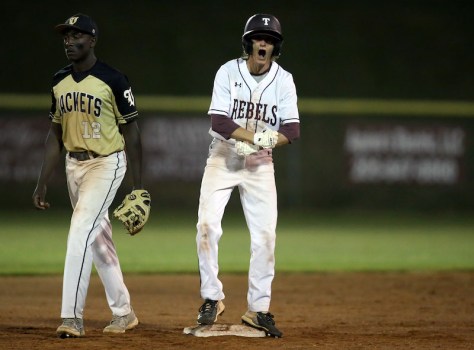 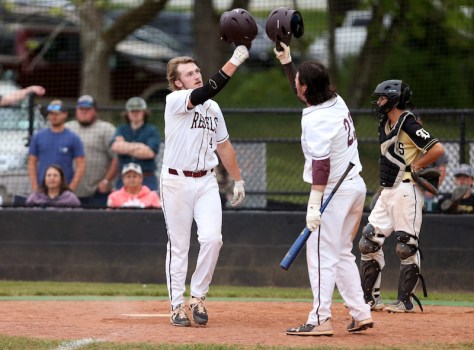 Thorsby's Tanner Jones gets a salute from Noah Littlejohn after a solo home run by Jones in game 1. (BRANDON SUMRALL/ SPECIAL) 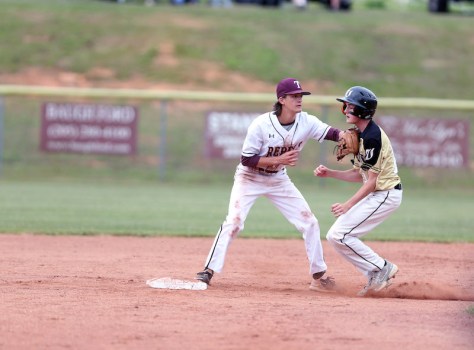 Thorsby's Chandler Stephens applies a tag on a Vincent runner at second base. (BRANDON SUMRALL/ SPECIAL) 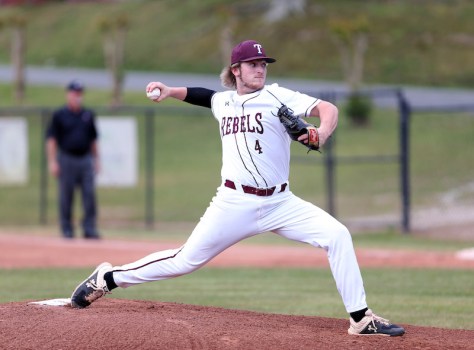 The Thorsby Rebels survived the opening round of this year’s 2A State Baseball Playoffs on April 23, advancing to round two thanks to a pair of wins over the visiting Yellow Jackets of Vincent High School. Both games were nail-biters as the Rebels won by scores of 2-1 and 7-6.

Game one of the best of three series got off to a bit of a slow start for both squads as stranded runners for both teams resulted in no runs through the first two innings.

A one-out hit by pitch to start the third set up the game’s first run, as an Eyan Davis RBI double gave the Yellow Jackets an early 1-0 lead. Thorsby answered with a run of their own in the home half of the fourth, as a one-out double by Noah Littlejohn set up an RBI single by Andrew Edwards, tying the game 1-1.

The tie remained intact through the bottom of the sixth inning. It was in the sixth though where Thorsby pitcher Tanner Jones lasered a solo home run deep over the left field wall that gave the Rebels a one-run lead and proved to be the deciding blow in a 2-1 Thorsby victory.

Jones handled the pitching for Thorsby in game one, throwing six and two third innings, allowing one earned run off three hits with two walks and 10 strikeouts. Littlejohn led Thorsby at the plate with a 2-for-3 performance, hitting a single and double. Edwards was a key contributor as well, bringing in one run for Thorsby with Jones adding another on his solo home run.

Game two of the night was a much different affair as, after a scoreless first inning, both teams had no problem tallying up runs. The Rebels were the first to strike as a two-out single by Luke Davis, along with a hit by pitch to Brody Clark, set up a two-RBI double by Chandler Stephens that gave Thorsby an early 2-0 lead.

Vincent made it a one run game during the bottom of the third inning, as a lead-off walk to Zach Carlisle set up an RBI single by Aiden Poe to make the score 2-1 after three innings.

The fourth inning of the contest saw the Rebels escape a bases loaded situation by Vincent with minimal harm, however, the Yellow Jackets did add one run in the inning to make it a 2-2 game after four innings of play.

With Thorsby going scoreless through the top of the fifth, the visiting Yellow Jackets tacked on two more runs in the bottom half of the inning thanks to a pair of RBI singles by Cole Gowers and Camden Cobb, giving Vincent a 4-2 lead.

As action moved to the top of the sixth inning, a pair of lead-off singles by Edwards and Davis resulted in a pair of runs for Thorsby as both came around to score on a ground ball by Clark and an RBI single by Christobal Sanchez. An RBI single by Levi Glover in the bottom half of the inning gave Vincent one of those runs back, giving them a 5-4 lead over Thorsby going into the seventh inning.

A pair of quick outs and a walk to Kohen Davis knocked the Rebels down to their final out with one man aboard. Walks to Davis and Clark quickly loaded the bases, however, and another walk to Stephens tied the game at five runs apiece. Sanchez drove in two more Rebels quickly after thanks to a Yellow Jacket error.

With Vincent coming to bat in the bottom of the seventh, Thorsby held a 7-5 lead.

Cobb got the inning started with a lead-off double and quickly made it a one-run game after an RBI single by Easton Fields. A pair of fielder’s choice outs by Thorsby knocked the Yellow Jackets down to their final out. Hueston Schiller came up to bat with a chance to save the Yellow Jackets’ season. But he smacked a fly ball to right field that ended up being the last play of the as Luke Davis hauled it in to seal the victory and send Thorsby to round two of the 2A playoffs.

Remington Taylor got the start on the mound for Thorsby in game two. He threw four innings, allowing one earned run off two hits with six walks and five strikeouts. Davis led the Rebels at the plate with a 3-for-3 performance, hitting three singles while Stephens added a double and three RBIs.