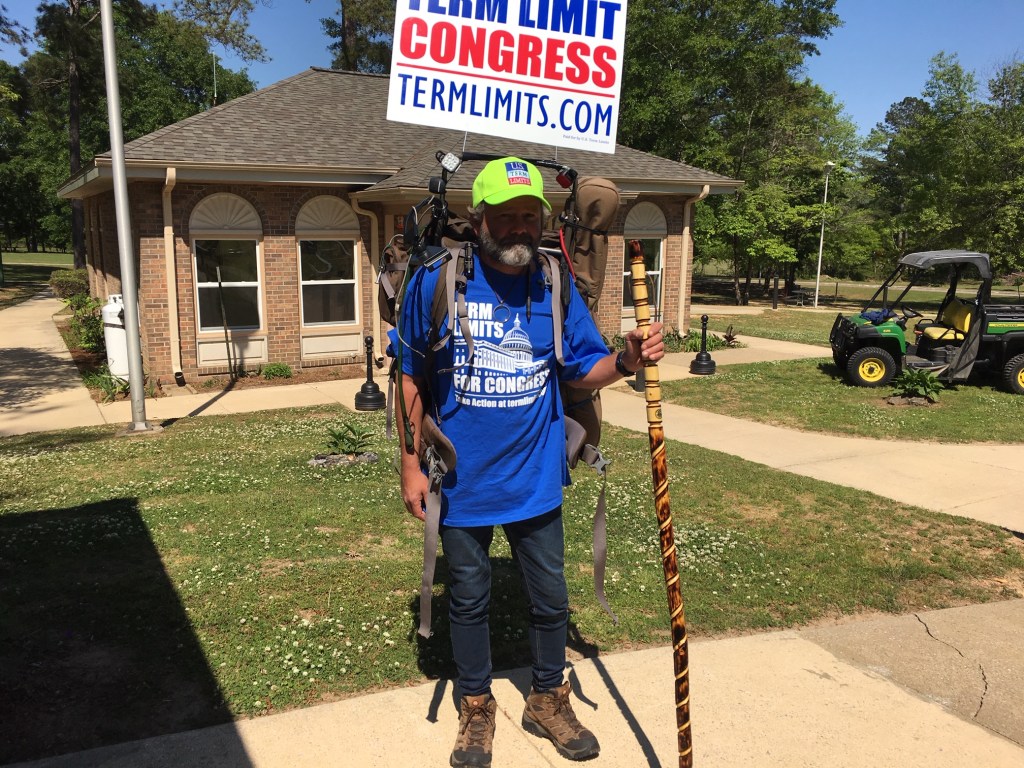 Tim “Izzy” Israel stopped at the rest area in Maplesville on Highway 82 during his walking campaign for Congressional term limits. (JEFF TILLMAN/ CONTRIBUTED)

A desire to raise support for the idea of term limits for members of Congress has prompted Tim “Izzy” Israel to walk from Key West, Florida to Washington State.

Israel’s trek brought him through Maplesville via Highway 82 on April 22.

He said the timing of the campaign was chosen after he lost his job in the entertainment industry because of COVID-19 cuts.

“I thought I would take one year of my life and try to change something that I see as major problem with our Federal government,” Israel said. “… I feel like it is all of our responsibility to see that no one can make a career of being a lawmaker … I think that just invites corruptibility.”

The walker started his journey without prior experience or training and alone.

After he was interviewed on TV, the organization U.S. Term Limits, which was established in 1990 to support the same cause Israel is walking for, met up with him to offer support and combine efforts.

“I’m getting press for the first time,” Israel said. “I’m not used to that.”

Now, Jeff Tillman, deputy field director for U.S. Term Limits, is taking Israel on some detours for interviews, always driving him back to where he left off his walk.

Tillman is also making sure that Israel has a safe place to sleep, usually in Tillman’s RV.

“That was our main concern that he survive this effort and to help get the word out,” Tillman said.

Israel had started out with “a tent, everything on my back, sleeping in the woods at night, trying not to trespass.”

He made it to Ozark, Alabama, before he started having an issue with his ankle, and contacted some friends to pick him up so that he could rest.

U.S. Term Limits wants to have Israel walk in all of the 48 continental states, and he said he is up for the challenge. The idea is to be strategic in places they go.

When he is done, Israel will have walked more than 3,900 miles.

Israel wants to see term limits put in place for U.S. Representatives and U.S. Senators during his lifetime.

The U.S. Supreme Court ruled in 1995 that this can only be done through an amendment to the U.S. Constitution, Tillman said. Article V allows states to pass a resolution calling for a Congressional convention to propose a Constitutional amendment. Israel and Tillman said 34 states would have to pass such a resolution for the convention to be held. The proposed amendment would then have to be ratified by 38 states.

Israel had watched a video of the U.S. Term Limits president speaking to the U.S. Senate in 2020, and it inspired his trip, even before the group connected with him.

Despite the challenges, Israel has enjoyed the scenery along the route and the hospitality and generosity he has received.