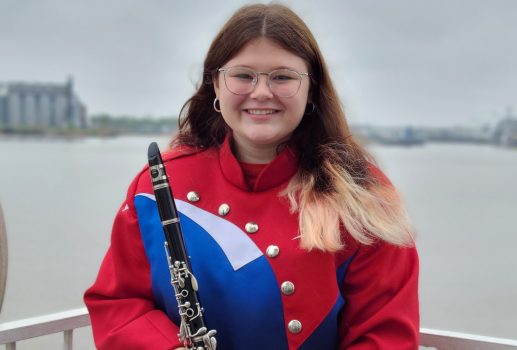 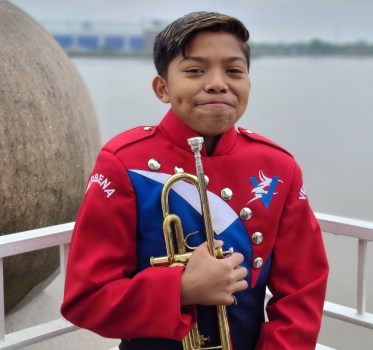 The three-day event was an opportunity for them to be a part of a band larger than they are used to and work with new people.

Acceptance to the performance was based on students’ auditions.

Versain, a seventh grade trumpet player, said he had to play a new song that had been selected specifically for the audition.

He said he wanted to audition because he thought being a part of the band “would be a great experience.”

Abaigeal, a ninth grade clarinet player, wanted to be a part of the All-State Band to have an opportunity to play with a larger band.

“I like the sound of larger bands with more instruments,” Abaigeal said.

Auditions were recorded and then sent to the selection committee.

“They worked super hard,” band teacher Randi Simpson said. “I kind of sprung it on them at the last minute.”

Whether the concert would be held had been uncertain because of COVID-19 concerns. Once it became clear that it would be held, Simpson encouraged Versain and Abaigeal to audition.

“We were thrilled that they were able to participate this year, especially coming from a small school,” Simpson said.

There were 286 middle school students selected from bands throughout the state. Students were divided into two bands for the event. The opportunity is open to public school, private school and home-schooled band students.

Going into the concert preparation, the VHS students were looking forward to working with students from other schools.

Versain, who has been in the band program since fifth grade, said he was thinking about how there would be more experienced musicians playing at a higher level that would help him become a better musician.

Abaigeal, who has been in band since seventh grade, said she was thinking that there would be “different techniques and experience levels.”

The event started with a day and a half of intense practice learning new material. At VHS, the band usually takes a month to prepare for a concert.  Versain said there were some high notes that were difficult to reach at first, but as they practiced he was able to reach them.

“The music was harder than what we usually do in our band,” Abaigeal said.

In addition to “getting to learn new stuff” through the practices, Versain also enjoyed going to restaurants every day during the trip.

Abaigeal said she chose the clarinet “because I like the way it sounded, and I had a friend who played it and she talked about how much she loved it.”

Versain found inspiration for his instrument choice on YouTube.

“I saw a song, and it really interested me, and I thought, ‘I could play like that one day,’” Versain said.

Both students have also been selected to participate in the District 5 Honor Band, which they auditioned for.