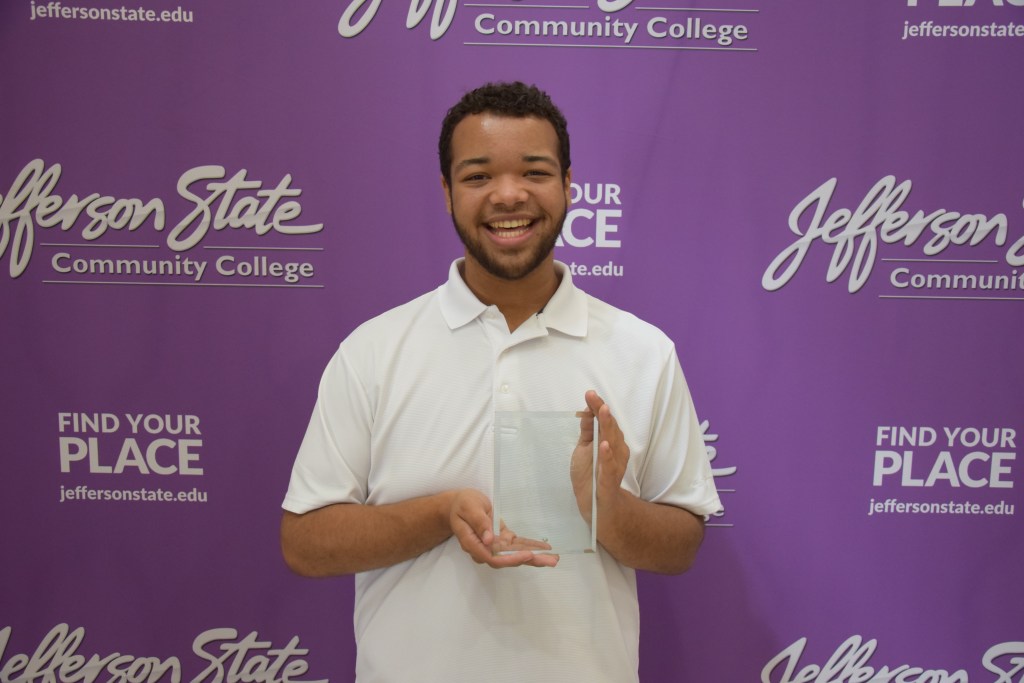 In addition to the Carson Award, Austyn Lucas was also named Ambassador of the Year and Outstanding Spotlight Drama Club Member. He was the only student who won three awards.

Jefferson State announced the winners of its top annual awards during a virtual Honors Convocation on Thursday, April 15.

The first award announced was the H.Y. and Ruby K. Carson Award, which is named in honor of the couple that donated the initial 70 acres for the college’s Jefferson Campus. After H.Y. Carson’s passing, his wife, who was a longtime member of the Jefferson State Foundation, established an endowed memorial scholarship to honor her late husband.

“There’s something special about this year’s Carson Award winner,” Warren said about the award recipient, Austyn Lucas of Clanton. “Yes, he’s intelligent, and he’s talented, and he’s dedicated, and all of those other adjectives we associate with the ideal student. But there’s something deeper and undefinable about this student. I can’t quite pin it down, but it must have something to do with his perpetual positivity—always that smile on his face and this deep enthusiasm for learning.”

The Eugene G. Fitzgerald Award is awarded in honor of Mr. and Mrs. Eugene Fitzgerald, who were also instrumental in the formation of the college, donating 40 acres of land to be used for scholarships.

“In her time as our campus intramural representative, she has helped our campus with several virtual events as COVID has prevented many of our previous activities,” Kitchens said. “She has facilitated two years’ worth of Black History Month initiatives and Women’s History Month initiatives. In 2020 she created a virtually interactive mural about the Freedom Trail and a mural about Women’s Votes, and this year she worked alongside our Ambassadors on our Black History weekly spotlights and is currently putting together our Women’s History weekly spotlights.”

Janice Ralya, director of the Jefferson State Speech and Debate Team, next presented the James B. Allen Award to Daniel Davis.

“Daniel has maintained an impressive 3.954 GPA while working at a bank and serving in leadership positions in two student organizations (president of Zeta Chapter of Sigma Chi Eta and debate captain of the Speech and Debate Team). One story from his first tournament at Lee College sums up Daniel’s character. At his very first debate tournament, Daniel made it into elimination rounds. Since the pairings in elimination rounds are based on preliminary rankings, Daniel was scheduled to debate against his own teammate and it was left to the team to decide which of the two team members would advance. Before I could even deliberate on the issue, Daniel told me, ‘I’m glad I made it this far, but let’s do what’s best for the team and I think the other team member should advance.’ Daniel is a true team player and has been invaluable to the Debate Team over the past two years.”

The Allen Award is given in memory of former U.S. Sen. James Allen and Jack Ray, chairman and CEO of The Exchange Bank of Alabama.

The final student award presented during the Honors Convocation was the Thomas E. and Judy M. Merritt Scholarship.

Judy M. Merritt was president of Jefferson State for 35 years.

“Judy was a woman of unparalleled vision and was truly dedicated to making a better college for our students,” President Keith Brown said. “If you knew her, you know that her husband Tom was a guiding force in all that she did.”

The scholarship was presented to Stef Shannon.

“Over the last few years, I’ve learned that establishing relationships early is the key,” Swindall told the committee that selects the Outstanding Faculty Member.

“Amanda is excellent in that regard,” McRae said. “For two years, she and I shared a wall between our offices, and I learned what a fun, engaging and helpful colleague she is. Those characteristics translate to the classroom.”

The Honors Convocation can be viewed at jeffersonstate.edu/2021-honors-convocation.