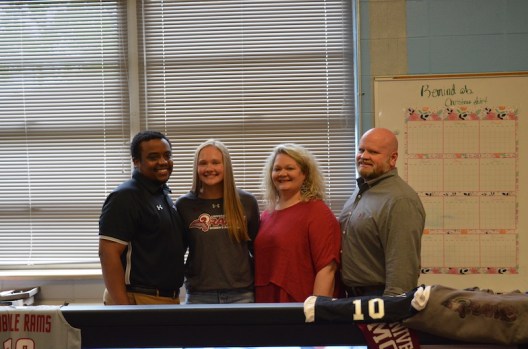 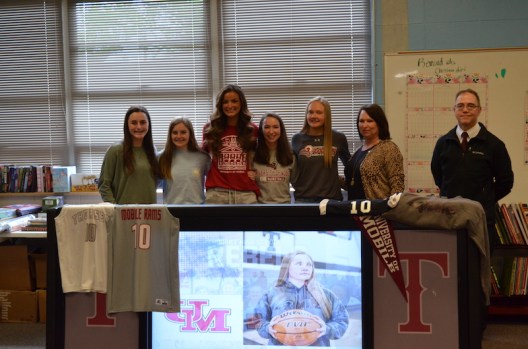 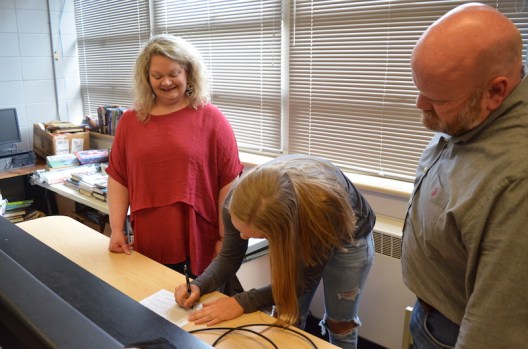 Carlee Wyatt makes it official as she signs to play college basketball at the University of Mobile. (ZACHARY SEIFTER/ ADVERTISER)

For Carlee Wyatt, a leap of faith was all that was needed for a chance to play college basketball.

That leap of faith came in the form of an email that Wyatt sent to the University of Mobile’s women’s basketball coaching staff two years ago when she was in the 10th grade. The email sold Wyatt as someone who loved the game of basketball, and felt that the University of Mobile was where she was being led to go. The email was quickly responded to, as the coaching staff saw something special in Wyatt, and began recruiting her.

At that point, Wyatt was sure of continuing her education after high school at the University of Mobile. She was not as sure of a future for herself in college basketball though, but if she was going to play anywhere, she wanted it to be in Mobile. She just needed a sign that a college basketball career in Mobile was where her life was meant to go.

That sign came in the form of a sweatshirt. One day when still contemplating her future, Wyatt decided to go to a thrift store in Alabaster with one of her friends. While looking inside the store, Wyatt found a sweatshirt with the University of Mobile logo on it, along with the number 10, the number she wears on the court for Thorsby High School.

“I was like, ‘What are the odds that I find a Mobile sweatshirt in Alabaster?’” Wyatt said. “It had my number on it, so I was like, ‘I think that might be my sign that Mobile is where I’m supposed to be.’”

Fast forward to April 15, 2021, and Wyatt has found herself now part of the University of Mobile women’s basketball team, made official with her signing.

“We’re always looking for high-character kids to come to our university and she definitely fit the mold,” University of Mobile assistant coach Laromeo McKee said. “We looked at the film and she was exactly what we needed.”

Wyatt is expected to bring a tenacity and grit to the guard position for the Rams. Her work ethic and dedication are on display already as she has begun individual workouts in preparation of her first college season.

For Wyatt and her family, the chance to play college basketball still feels like a dream. It has not truly hit them that it’s happening.

“[It’s] kind of like you can’t really believe it,” Wyatt’s mother Stacey Wyatt said. “We’ve always known she was talented and always thought she had the ability to play but … you kind of sit there with your mouth open as the things happened and just kind of fell into place.”

Even though it’s hard to believe that the pieces fell into place as conveniently as they did for Wyatt, fate’s plans for have brought her to Mobile. She has made it to this point through faith and hard work. All that’s left now is for her to make good on her leap of faith and dominate on the court.