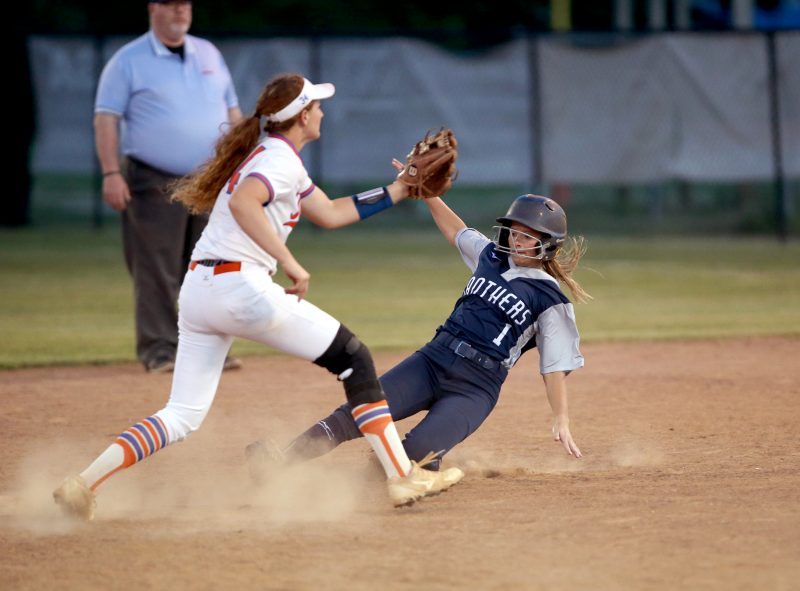 In what appeared early on to be a one-sided blow out, an April 15 softball matchup between Jemison and Chilton County came just two runs shy of being labeled as a comeback of epic proportions as the Lady Panthers escaped a road trip to Clanton with a 9-8 win over the Lady Tigers.

A quiet top of the first inning for the visiting Panthers gave way to the home half of the inning where the Tigers were the first on the board thanks to a Jemison error off the bat of Maddie Giles that scored Tyeshia Williams making it an early 1-0 Chilton lead.

With both teams going quietly through the second, a big top of the third for Jemison propelled the Panthers way out in front. A pair of lead off singles by Kinlsey Martin and Sarah Hubbard gave Jemison two aboard with only one out while a hard ground ball from Makalah Skinner saw a Tigers error allow Hubbard to score. Another Chilton error on a fly ball hit by Makayla Lang scored Bolton while a two-RBI single by Bella Gilliland scored two more Panthers to make it a 4-1 game.

Jemison added one more in the top of the fourth inning thanks to a wild pitch, allowing Harley Genard to score making it a 5-1 Panther lead.

Still sporting a four-run lead in the top of the seventh inning, the Panthers tacked on four more as singles by Martin and Gilliland followed by another Tiger error loaded the bases for Jemison with no outs on the board. A pair of hard ground balls by Martin and Hubbard along with yet another pair of errors by the Tigers scored two for Jemison, while a two-RBI single by Kinlsey Bolton added two more for the Panthers.

With Jemison holding a 9-1 lead and the Tigers down to their final three outs, action moved to the home half of the seventh with Chilton in an eight-run whole.

Emma Deason got the inning started by reaching base after being hit by a pitch, while Maecie Driskell and Josie Cornell followed with singles to load the bases for the Tigers with only one out. An RBI single by Macey Pierce scored one for Chilton, but it was a base-clearing grand slam by Marlie Giles that deeply cut into the Panthers lead. Williams followed with a solo home run while a RBI single by Jadyn Kurdziel drawed the Tigers to within one with two away. Down to their final out and with the winning run on second, a fly ball to left field was hauled in by Jemison’s Brooke Smith to seal a 9-8 victory for the Panthers.

Gilliland led the Panthers at the plate with a 3-for-4 performance with three singles and two RBI’s while Bolton pitched 6 1/3 innings, allowing five earned runs off eight hits with two walks and eight strikeouts.

Pierce and Williams each had a pair of hits with an RBI for Chilton while Mallie Harrison handled the pitching assignment for the Tigers and threw a complete game, allowing no earned runs off eight hits and two strikeouts and five walks. The Tigers finished the evening with eight total errors.