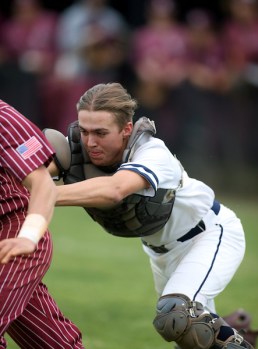 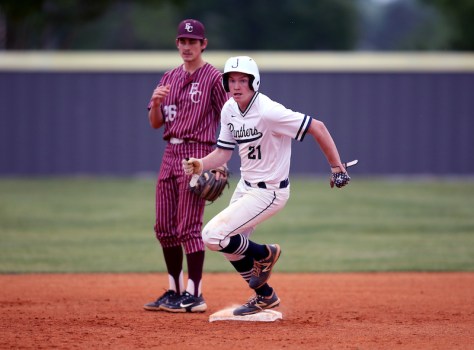 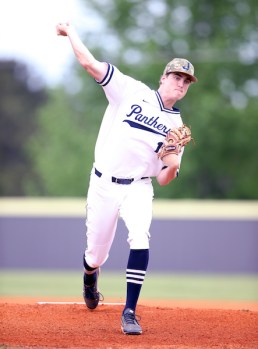 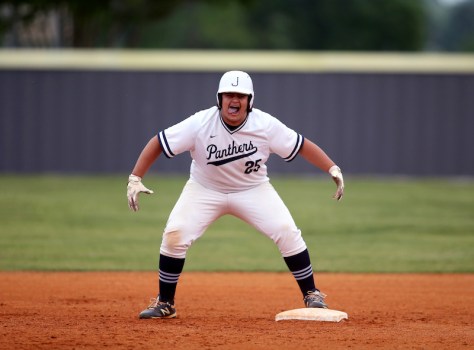 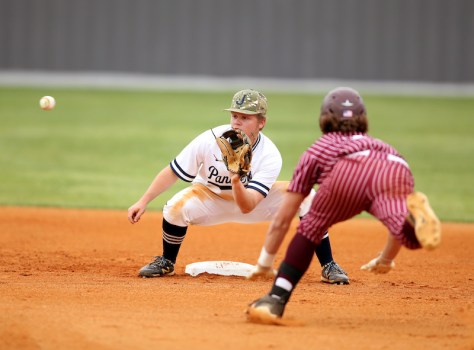 An Elmore County base runner gets thrown out at second base. (BRANDON SUMRALL/ SPECIAL)

A slow night at the plate cost Jemison High School on April 16 as the Elmore County High School Panthers took down Jemison to put a damper on Senior Night, beating Jemison by a score of 10-2 in game one of a two-game set.

Starting pitcher Nathan Johns and the Jemison defense made short work of the visiting Elmore County Panthers in the top of the first inning. The Jemison offense followed with a lead-off single by Austin Wyatt and an RBI single from Gaven Smitherman, giving Jemison an early 1-0 lead.

The Jemison lead was short-lived, however, as a lead-off double by Cole Downey set up an RBI single by Brandon White, tying the game at one.

The score remained tied through the third inning before a solo home run by Brody Ward in the fourth inning put Elmore County on top 2-1. Jemison followed with three quick outs on offense, moving action to the fifth with Elmore County leading by one.

A lead-off walk to Nassin Bryan to start the fifth inning set up an RBI single by Payton Stephenson, with a Jemison error helping Bryan get home, extending the Elmore County lead to 3-1. Jemison answered in the bottom of the inning with a run off a ground ball by Hayden Robinson, along with a Elmore County error, to cut Elmore County’s lead to one with two innings left of play.

The sixth inning of the contest came and went with no change in the score, while the top of the seventh saw things begin to unravel for Jemison. A one-out walk by Stephenson set up a run-scoring fly ball by Sean Darnell, aided by another Jemison error. Darnell would later score on a RBI single by Ward. With the addition of a bases loaded walk, an RBI bunt, and an RBI single, Elmore County scored seven runs in the inning, taking a 10-2 lead.

A pair of two-out walks for Jemison in the home half of the seventh gave the home team a little hope, but a ground ball to the Elmore County shortstop was quickly flipped to second base and then over to first base for a game ending 6-4-3 double play.

Johns handled pitching duties for Jemison, throwing six and two third innings, allowing five earned runs off 10 hits with five walks and six strikeouts. Wyatt led Jemison at the plate with a 3-for-5 performance with a single and two doubles.

Jemison fell to Elmore County in the second game of the two-game set by a score of 12-7.