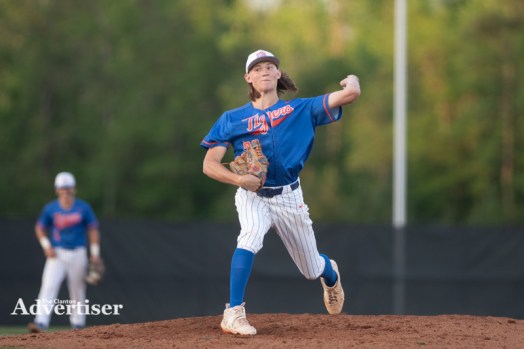 Pico Kohn threw a fantastic game for CCHS on April 15. He threw all seven innings, giving up zero runs off two hits with zero walks and 14 strikeouts. (KEITH MCCOY/ ADVERTISER) 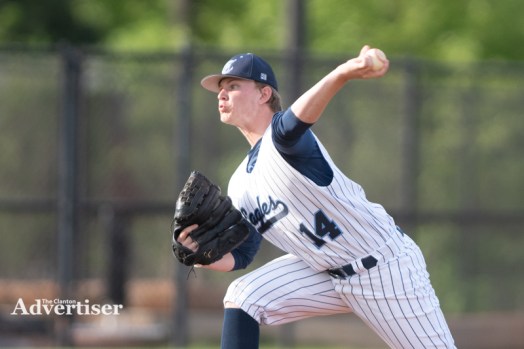 Calera’s Matthew Bullard pitched an outstanding game for the Eagles. He pitched six and two third innings, giving up one run off five hits with two walks and six strikeouts. (KEITH MCCOY/ ADVERTISER) 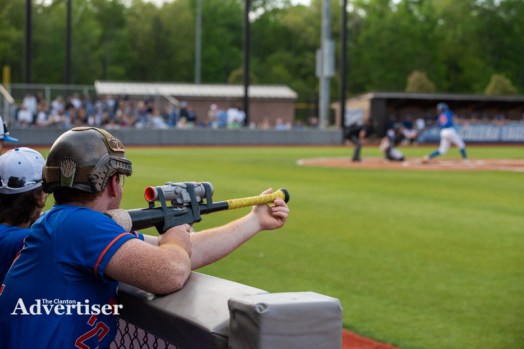 Players in the CCHS dugout goof off during the game against Calera on April 15. (KEITH MCCOY/ ADVERTISER) 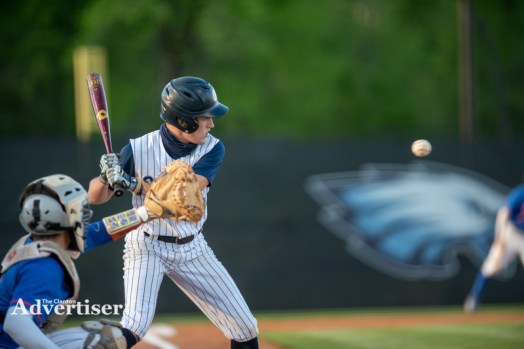 Calera hitters struggled to hit anything with Pico Kohn on the mound for CCHS. The Eagles managed to put just four runners on base in the loss to the Tigers. (KEITH MCCOY/ ADVERTISER) 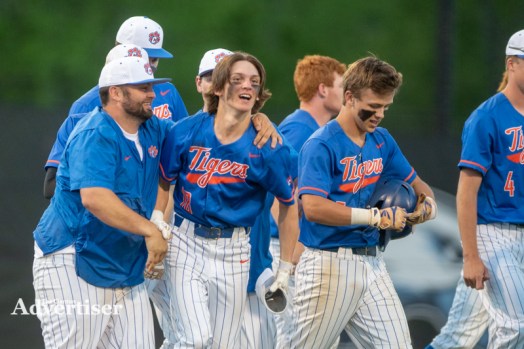 The CCHS players and staff celebrate with Katon Elijah after his walk-off single to send the Tigers to the postseason. (KEITH MCCOY/ ADVERTISER) 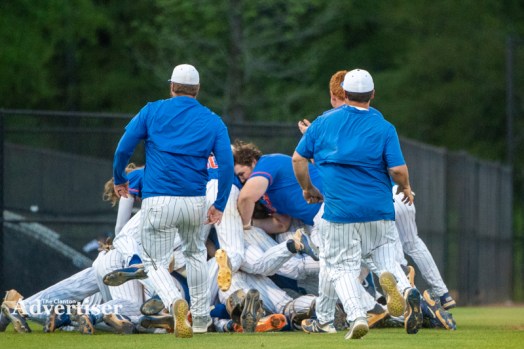 The CCHS baseball team piles on top of Katon Elijah after he hit the game-winning single to send the Tigers to the playoffs. (KEITH MCCOY/ ADVERTISER)

The stakes were as high as they could be for the Chilton County High School baseball team on April 15.

With just three games to go in the regular season, the Tigers found themselves tied with Calera High School for the final playoff spot in the area, and the two teams faced off in a win-or-go-home matchup. It was the Tigers who came out victorious, beating Calera 1-0 on a walk-off single by Katon Elijah in the seventh inning.

With the game practically being a playoff game, each team threw its best pitchers. Ace Pico Kohn took the bump for the Tigers, while Matthew Bullard was on the mound for Calera. Each brought their A-game in the contest.

It was a back-and-forth slugfest from the pitchers. Kohn started the game hot, striking out nine batters in the first three innings while allowing only one baserunner on a hit-by-pitch for Calera’s Matthew Windham.

Bullard didn’t start the game quite as well as Kohn. He allowed CCHS runners to get into scoring position in each of the first three innings. However, he was able to get himself out of each jam, keeping the game tied 0-0 after three innings.

Bullard would get hot in the next three innings though, not allowing a runner to reach base from the fourth inning through the sixth. The Calera lineup started to get a little bit of action offensively, managing to get runners on base in the three innings, but Kohn stifled the Eagles, not allowing any runs to come home.

Going into the seventh inning, it seemed as if the game was destined to go into extra innings. That feeling only became stronger as Kohn flew through three Calera batters in the top of the inning, keeping the game tied and giving CCHS a chance to pull out the victory on a walk-off hit.

In the bottom of the inning, the Tigers offense found life. After Dylan Cullum started the inning with a groundout, Sam Smith broke through with a single, giving the Tigers their first base runner since the third inning. Cannon Miller followed with a sharply hit ball to Calera’s shortstop. The ball hopped up on him, allowing both runners to reach safely.

With runners on first and second and just one out, Leighton Coppedge came to the plate looking to be the hero for the Tigers. He quickly went down 0-2 in the pitch count though. But Bullard made a critical mistake, hitting Coppedge in the elbow with the next pitch, loading the bases for CCHS, or so they thought. It was quickly determined by the officials that Coppedge leaned into the pitch, causing him to be hit, so he was sent back to the plate and the hit-by-pitch was annulled. Coppedge struck out two pitches later.

Next up was Katon Elijah. The junior had no luck getting past Bullard all game, going 0-for-2 in his previous at-bats. He fell behind in the count 0-1 after missing the first pitch, fouling it off. He did not miss the second though. On the next pitch, Elijah slashed a deep fly ball to right-center field, drawing every person on the field, in the dugouts and in the stands to hold their breath collectively. As the ball fell past the mitt of the Calera right fielder, the CCHS bench and stands went into absolute madness. Smith crossed the plate, sending the Tigers to the state playoffs.

“It was a great moment for our offense to be able to get it done right there in the last inning with a walk-off hit,” CCHS head coach Ryan Ellison said. “They kept battling, they kept fighting, we just couldn’t get anything going. We get a few hits here and there, we’re getting people on base, just haven’t been able to score here lately. I was really proud to see that happen for our offense.”

The struggles on offense were apparent in the first six innings. The Tigers had chances to get on the scoreboard early in the game, but missed on each one, leaving runners in scoring position. When it mattered most though, Elijah came through for the Tigers, and his teammates were the first to celebrate with him and let him know how proud they were of him.

“I can’t say some of them,” Elijah said of his teammates’ comments to him after the walk-off hit. “But they said way to step up and be a leader.”

Lost in the madness of the walk-off victory is Kohn’s performance. In seven innings pitched, Kohn gave up zero runs off two hits with zero walks and 14 strikeouts.