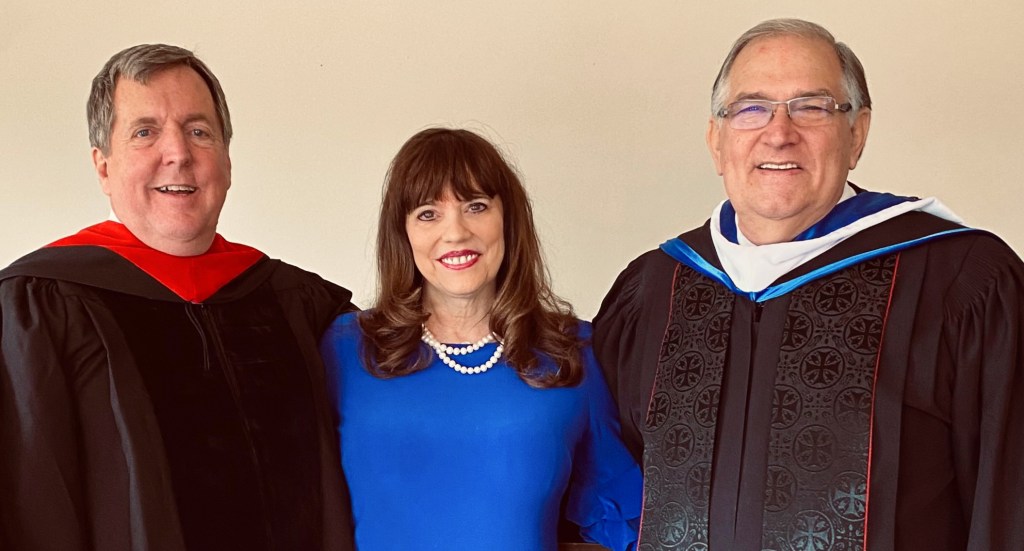 From Bridges of Faith

The Rev. Tom Benz, founder and president of Bridges of Faith Ministries, in Billingsley has received his Doctor of Divinity (honoris causa).

“The Doctor of Divinity is an ecclesiastical award that honors ministers and religious scholars of distinction,” Bishop Rob Schenck, Methodist Episcopal Church USA said. “The Doctor Divintatis is historically known as ‘the Bishop’s degree.’ The Methodist Evangelical Church grants the title to ordained clergy who hold appropriate academic bona fides, have served the church honorably for at least two decades, and whose peers recognize them as ‘pastors of pastors.’”

Chilton County knows Benz as the founder of Bridges of Faith, the organization who has brought hundreds of Ukrainian orphans to their facility south of Clanton. These kids have received a great Christian camp experience and over 150 orphans have found forever homes.

Benz attended Kentucky Wesleyan College on full scholarship in 1972. At age 18, he felt his call to ministry and started his ministry career at age 19 as a youth director. (He was also in a quartet playing the piano traveling all over Kentucky while in college.) On college graduation, Benz served as chaplain of the United Methodist state-wide camping program in Kentucky. At age 23, he was asked to serve his first church as pastor at which time he started Vanderbilt Divinity School. He served Methodist churches for the next five years. He then served the next 10 years planting churches in Kentucky.

Some of Benz’s accomplishments for the Lord include starting a two-year Bible college, Lexington Bible Institute, for ministers who could not afford seminary. He received his Masters degree from Oxford (not England, but associated with it). Benz spoke on a Christian broadcast station in Lexington five days a week while pastoring in Lexington. He has traveled all over the world speaking at Bible Conferences, (the Philippines, Guatemala, Bulgaria and Mexico.) Tom also led a prayer conference a few years ago in Israel.

After doing ministry in churches, Benz felt lead to work with the Christian Appalachian Project in Kentucky, serving as assistant to the founder. Later, he was offered a position and felt the call to move to Montgomery to work with Father Walter’s home for handicapped children.  Once again, God called him to plant a community Bible church in Millbrook.

Later, Benz felt the call to International Bible Society serving as a regional director.  This included placing Bibles in orphanages around the world in Africa, Guatemala, Russia and all of Eastern Europe placing more than a million Bibles in Eastern Europe. Most of his hands on visits were in Bulgaria, Russia and Ukraine. One of his proudest moments was playing a part in completing the Chichewa translation of the Bible for the Malawi Africans who never had a scripture in their language.

More than 20 years ago, Benz felt a strong call to create Bridges of Faith, a missions organization focused on Ukrainian orphans. He took ministry team after ministry team to Ukraine orphanages, sharing with those children that they have a heavenly Father who will never leave them nor forsake them. The programs initiated raised up Ukrainian nationals to reach out to the children and brought tons and tons of humanitarian aid. Benz partnered with Samaritans Purse and distributed tens of thousands of shoe box Christmas gifts and he partnered with the International Bible Society and the Gideons to put age appropriate Scripture in the hands of orphans. At Christmas in 2010, Benz started bring the orphans to Alabama.  Bridges of Faith gave these children a great camp experience and helped them find adoptive homes.

The next orphans will arrive at the end of July this year.

In addition to his work with Bridges of Faith and orphans, Benz also serves as the co-chair of the clergy commission of the Dietrich Bonhoeffer Institute in Washington DC. He and Nancy, his wife, live at the Bridges of Faith campus near Enterprise, Alabama.  For more information, look at their Facebook page at www.facebook.com/bridgesoffaith or call 205-586-1281.