Turner walks off for Thorsby again 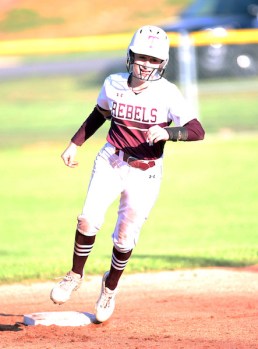 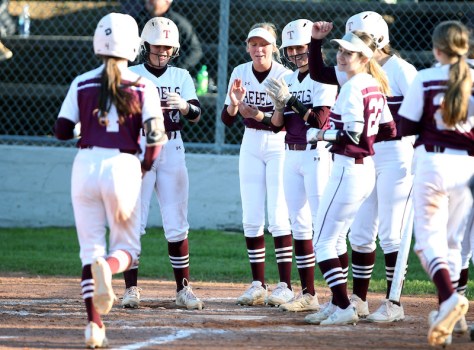 Turner is greeted at home after her walk-off home run. (BRANDON SUMRALL/ SPECIAL) 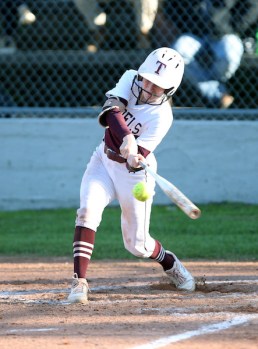 Not all superheroes wear capes. Take Thorsby High School Freshman Makinley Turner, who for the second time in two days propelled the Lady Rebels to victory. After hitting a walk-off three-run homer in a defeat over Holtville on April 1, Turner added another walk-off victory to her resume on April 2, helping the Rebels pick up a 5-2 victory over cross-county rival Isabella High School.

A scoreless top of the first for Isabella gave the Rebels a chance to be the first to get on the board. A fielder’s choice single to Cameron Lockhart, followed by a single from Lindsey Burnett set up a two-RBI double by Turner, which came thanks to a Mustangs error, giving Thorsby an early 2-0 lead.

With both teams going quietly through the second, the top of the third saw the Mustangs get on the board via an RBI-single by Amelia Fjeldstad that cut the Thorsby lead to one.

The fourth inning of the contest saw both teams go scoreless again, while in the top of the fifth Isabella tied things up thanks to a solo home run by Cadence Headley.

The 2-2 tie remained intact through the top of the seventh inning, where a two-out single by Blair Underwood did little to help the Mustangs’ cause as action moved to the bottom half of the inning still tied at two. A lead-off single by Madisyn Ellison got the inning going, but was followed by consecutive outs for Thorsby. A walk to Burnett moved the game-winning run to second base, with Turner up to bat. After falling behind in the count 1-2, she launched a pitch deep over the left-center field fence to give Thorsby a walk off 5-2 victory over Isabella.

Turner also handled the pitching duties for Thorsby, throwing a complete game while allowing two earned runs off six hits with 12 strikeouts. Burnett led Thorsby at the plate with a pair of singles while Turner added a homerun and three RBI’s.

Madelyn Ratliff pitched a complete game for Isabella, allowing three earned runs off six hits with four walks and four strikeouts. Rae Ann Hall led the Mustangs at the plate with a 3-for-3 performance with three singles.