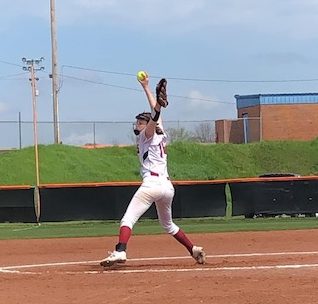 Lexi Smith pitched the first game for Maplesville, throwing all four innings, giving up seven runs, only one of which was earned, off nine hits with one walk and three strikeouts. (FILE)

The first loss, a 7-5 defeat against the John Carroll Catholic High School Cavaliers was a tough one for the Lady Devils. Maplesville started the game by digging a 5-0 hole early. However, the Lady Devils were able to climb back, scoring five runs to tie the game in two innings off base hits by Avery Reed and Jaycie Armstrong as well as Kaylee Cummings scoring twice on a wild pitch and passed ball.

John Carroll Catholic added two more runs in the fourth and final inning though, the runs coming off an RBI single by Kayla Coley-Drayton and a fielding error by Armstrong. Maplesville couldn’t generate any offense in the bottom of the innings, ending the game in favor of the Cavaliers.

Maplesville faced a familiar foe in the second match, facing the Chilton County Lady Tigers. Maplesville once again dug an early hole in the game, falling behind 6-0 to CCHS after just three innings.

The Lady Devils, however, were not able to dig themselves out of this hole. Mallie Harrison and Raygen Linville were outstanding from the pitcher’s mound for the Lady Tigers, giving up just two hits and five walks the entire game, keeping Maplesville from ever getting a run on the board. Maplesville lost the game to CCHS by a score of 6-0.

Lexi Smith and Cummings were the losing pitchers for Maplesville in the two games. Smith pitched the first, throwing all four innings, giving up seven runs, only one of which was earned, off nine hits with one walk and three strikeouts. Cummings pitched all four innings in the second game, giving up six runs, five earned, off five hits with two walks and one strikeout.

Reed had a good day hitting the ball for Maplesville, going a combined 2-for-4 in the two games with an RBI. Armstrong drove some runs home on the day, bringing in two RBI’s while going 1-for-4 in the games.