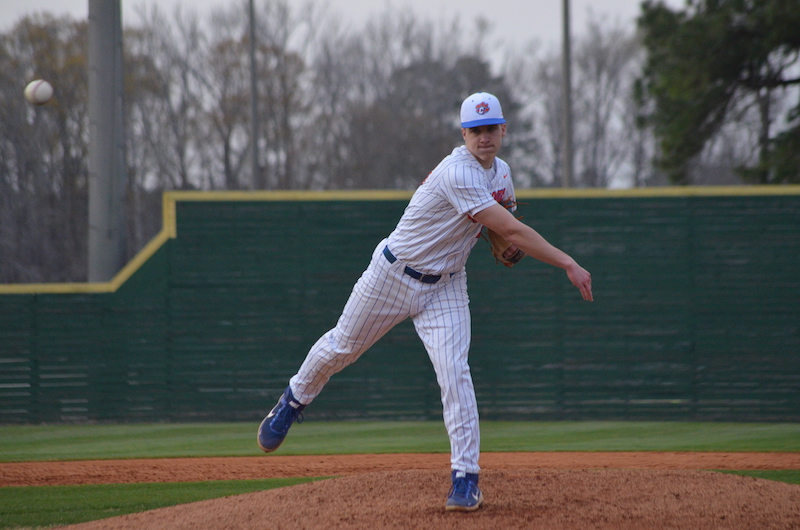 CCHS pitcher Aiden Bee took the loss in the second game of the Gulf Coast Classic II Tournament for the Tigers. He threw five and one third innings, giving up seven runs, only four of which were earned, off eight hits with four walks and one strikeout. (FILE)

The Tigers lost their first game to the Hayden High School Wildcats by a score of 5-4.

The Tigers started the game slow, getting just three hits in the first three innings, none of which got any runs home for CCHS. The score was 3-0 Hayden at the end of the third inning.

Things did not improve much for the Tigers in the fourth inning. Although Pico Kohn got home on an RBI single by Crawford Easterling, the Wildcats added the two deciding runs in the bottom of the inning off two RBI doubles by Braden Hodges and Carson Snow to bring the score to 5-1.

CCHS tried to rally in the final three innings, scoring three runs off a couple of RBI singles by Sam Smith and Deuntae Childers, along with an RBI groundout by Cannon Miller, but the lead was too large for the Tigers to overcome.

“We got a chance early to score some runs and we didn’t put any runs on the board,” CCHS head coach Ryan Ellison said. “That hurt us … you know, being at the beach, playing a 9 o’ clock in the morning has its own challenges.  Getting kids awake and ready to go at that time, that may have been part of our challenge early on, but we just couldn’t quite get it going with the sticks when we needed it to.”

After the early loss, CCHS got a chance at redemption in a second game. Once again however, the Tigers were unable to generate enough offense in their next game against the Thompson High School Warriors. They fell in that game as well, 8-3.

Another slow start doomed the Tigers, as Thompson jumped out to a 4-0 lead in the first two innings. The Tigers finally got on the board in the bottom of the third, with Smith bringing home Logan Stone on a sacrifice fly to make it 4-1 going into the fourth inning.

Each team added two runs in the fourth inning, but CCHS was unable to generate any more offense the rest of the contest, while Thompson added two extra runs in the sixth inning, finishing off the win for the Warriors.

CCHS will more chances to wipe the slate clean and get back in the win column on March 23 and 24, continuing the Gulf Coast Classic II Tournament with games against Alabama Christian Academy and Robertsdale High School.“Tomorrow’s a new day,” Ellison said. “We get another chance to go out and get a chance to compete again, and I think our kids will be ready to go tomorrow.”