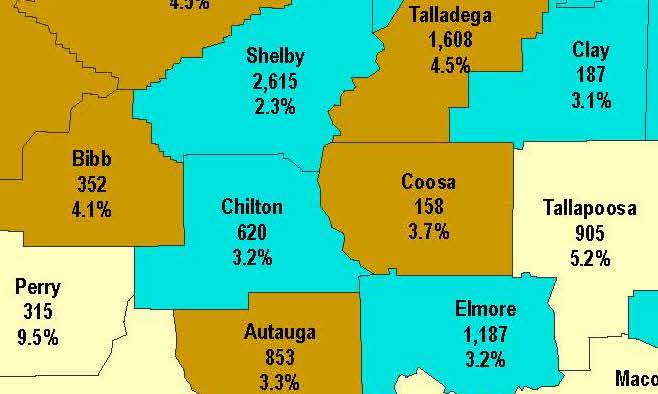 Chilton County saw a slight increase in unemployment in January.

The seasonally adjusted unemployment numbers for January released by the   Alabama Department of Labor on March 15 report the rate for Chilton County as 3.2% with 620 people unemployed.

While this is higher than December’s 2.9%, Chilton County remains below the state average of 4.3%.

This slight increase is likely impacted by seasonal employment that was available in December but ended in January.

The state average is down from Decembers revised rate of 4.7%.

“As we begin a new year, it’s encouraging to see our monthly unemployment rate drop, marking a new record low since the pandemic began,” said Alabama Department of Labor Secretary Fitzgerald Washington. “While we are still not where we were before this year of massive change, we are making progress.  More people were employed this month, and fewer were unemployed, which is always good news.”

Neighboring Shelby County was the lowest in the state at 2.3%, followed by Blount County at 2.4%, and Limestone and Cullman Counties at 2.5%.

“Counties with the highest unemployment rates are: Wilcox County at 12.4%, Lowndes County at 12.1%, and Perry County at 9.5%,” according to the ADOL press release.