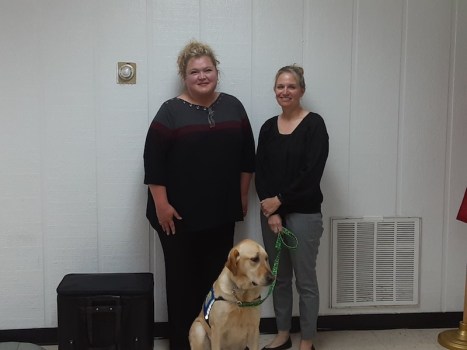 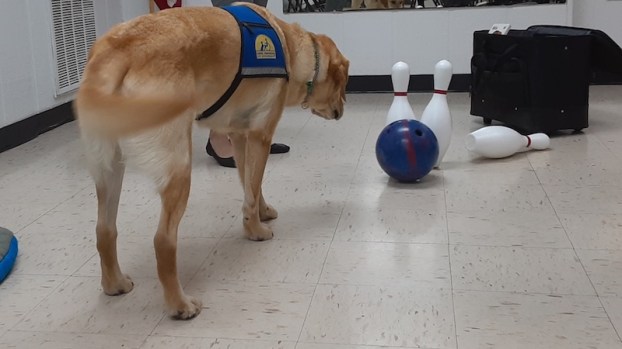 Fitz demonstrates his bowling skills. Just one of the tricks he has learned to help victims calm down and feel comfortable. (JOYANNA LOVE/ ADVERTISER) 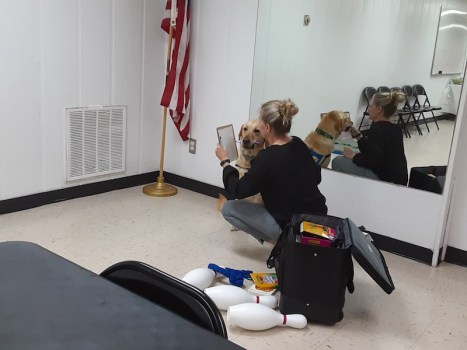 Tonya Willingham holds the paper so Fitz can draw. Willingham can move the paper in such a way that he writes a person’s name. (JOYANNA LOVE/ ADVERTISER)

Tonya Willingham and her unique business partner Fitz shared about working with victims during collection of evidence and court proceedings during a recent meeting of the Clanton Kiwanis Club.

They are a part of the HERO (Help Empower Restore and Overcome) program.

Fitz is from Canine Companions for Independence, a nonprofit that breeds dogs especially for being service dogs and trains them. Training begins as soon as the puppies are born getting them used to loud noises. At eight weeks, they are given to volunteer puppy raisers who help get them socialized and used to being around groups of people. He then received more training to qualify as a facility dog, including tricks, such as turning the pages of a book and bowling that helps put children at ease.

Willow’s Law, named after the first facility service dog, in Alabama outlines how dogs can be used in the courtroom and the training and qualifications required.

“Having the dog work with them (victims in a courtroom) is especially important because it gives them the courage to tell their story,” Willingham said.

This testimony is essential to the case.

“When a crime occurs, especially something that is violent, for children physical/ sexual abuse for adults a property crime could be traumatic, but a lot of times it is an assault, a rape, robbery,” Willingham said. “We have even used him for family members whose family member has been murdered.”

Fitz helps individuals through the stress hormones released by the brain during traumatic events.

“Your body will go into a fight or flight, survival kind of mode,” Willingham said. “Each time, we are asking these victims to retell their story their brain is getting back into that fight or flight mode.”

Just as the brain releases stress hormones during trauma, there are also hormones it releases that can calm a person down. One of the things that has been found to trigger the release of these calming hormones is seeing a dog, Willingham said.

“That gives you the ability to be able to think again to lower your breathing,” Willingham said. “It just helps you to be able to calm down and in a criminal justice setting that helps because we want a victim to be able to tell the jury, if it has to go to trial what has happened to them.”

Willingham said the facility dogs are mostly used when law enforcement or prosecutors need to interview from children who have been victims of crime. She shared read stories of how Fitz had helped a witness get through a trial and how children have told the dog things they would not tell the police officer.

Willingham was a police officer and assistant district attorney prior to becoming a facility dog handler with the Office of Prosecution Services.

Willingham first heard about “dogs being helpful to victims in the criminal justice setting through a presentation at an ADA conference.”

The idea appealed to Willingham, and four years later she began training to be a