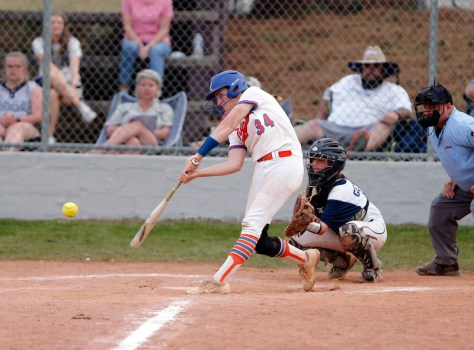 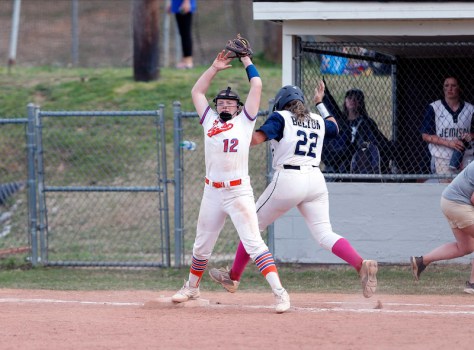 Mallie Harrison stretches for an out at first to beat out Kinley Bolton. (BRANDON SUMRALL/ SPECIAL) 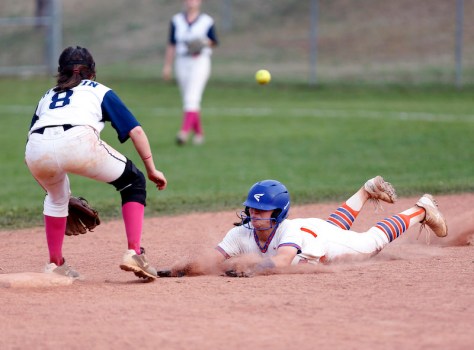 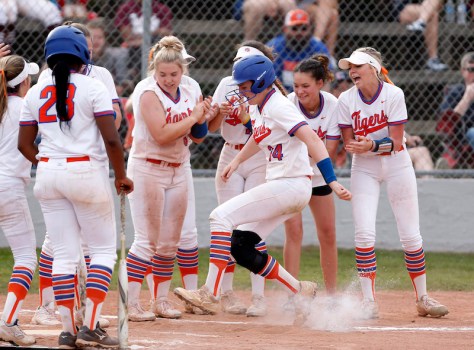 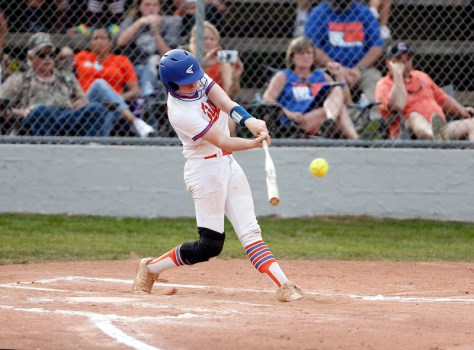 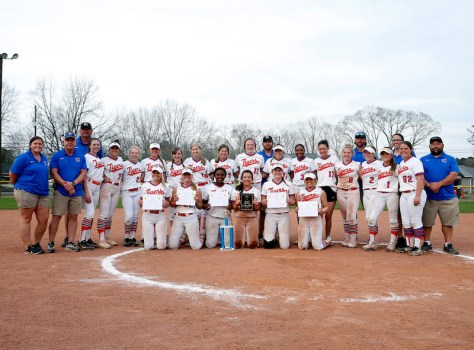 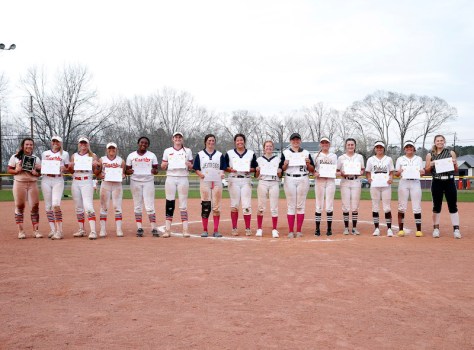 Why hit singles when you can launch bombs? The Chilton County High School Lady Tigers asked that question time and again on March 13 as they launched home runs all over the field to win the Chilton County Softball Tournament Championship 10-0 victory over the Jemison Panthers. The win gave CCHS their third consecutive county tournament title thanks to six home runs during the game.

A three up and three down first inning for Jemison started the game. The Lady Tigers wouldn’t start nearly as slow as a lead-off single by Macey Pierce set up an early two-run shot by Marlie Giles, her first and the Tigers first homer of the game. Ty’eshia Williams followed with a double, while a sacrifice bunt from Emma Deason scored Williams, giving CCHS a 3-0 lead after one inning.

Deason and the Lady Tigers defense made short work of the Panthers again through the top of the second with another three up and three down inning. CCHS then brought in two more runs in the bottom half of the inning off back-to-back home runs from Josie Cornell and Macey Pierce to bring the score to 5-0 after two innings.

The third inning of the contest saw the Panthers again retired in order while the Lady Tigers too didn’t add any runs.

The three up and three down trend continued for Jemison through the top of the fourth inning, while Giles launched her second homer of the night to start the home half of the inning, extending the Lady Tigers’ lead to six runs.

Jemison looked poised to break the shutout early in the top of the fifth, but a 6-5-3 double play, along with a ground ball to Williams got the Lady Tigers out of the inning with the Panthers still showing a zero in the runs column.

Maddie Giles joined the home run club to start the fifth inning with a solo shot to center field, bringing the CCHS lead to seven as action moved to the top of the sixth with the Lady Tigers leading 7-0.

A two-out double by Sarah Hubbard in the top of the sixth did little to help the Panthers, as a ground out to Williams brought the top of the sixth to a close. Meanwhile, a lead-off single by Cornell set up Giles for her third homer of the game, extending the CCHS lead to nine. The Lady Tigers soon after reached the ten-run mercy rule, securing the victory and the title

“I am really proud of our defense,” CCHS head coach Johnny Giles said. “Emma really controlled the game. She had great control of her drop ball and Jemison was never able to really get anything going. Obviously hitting six home runs was the difference in the game. Being able to hit for power is what we work on. We really focus on getting the ball in the air and it paid off today. I am really proud of them, just a dominating performance this weekend.”

Giles led the Lady Tigers at the plate with a 3-for-4 performance, hitting three home runs (four total for the day) and five RBI’s while Pierce, the MVP for the tournament, followed closely with a 3-for-4 performance at the plate with a homer (three on the day) and an RBI. Deason pitched a complete game shutout for CCHS with three strikeouts, two hits, and a walk.