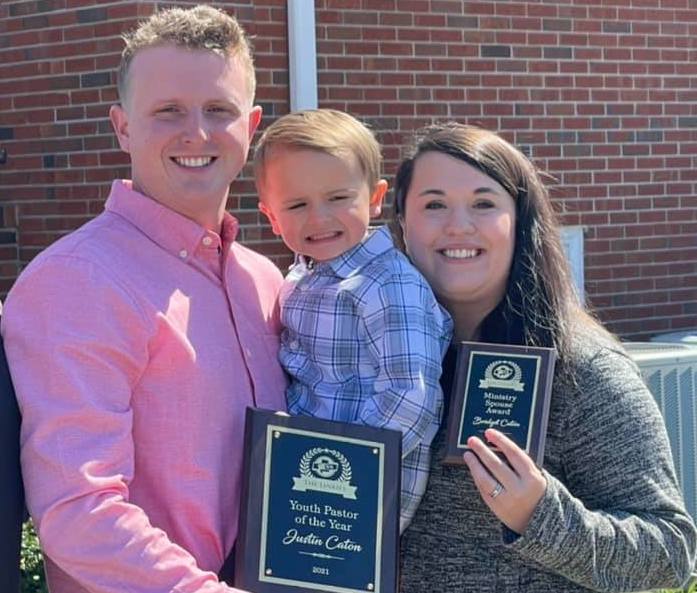 Justin and Bridget Caton are Alabama Baptist State Board of Missions Youth Ministry Link youth pastor and ministry spouse of the year.  (CATON/CONTRIBUTED)

Justin and Bridget Caton have been recognized for their work in student ministry by the Alabama Baptist State Board of Missions Youth Ministry Link.

Both awards are determined by Baptist student pastors in the state. Leaders nominate and vote on who they think should win each year.

The awards were presented during the March 7 service at Thorsby First Baptist. The YMLink director had contacted Justin ahead of time telling him that Bridget had been nominated for the Ministry Spouse Award.

“I connected him with my pastor, and then he kind of set it up,” Justin said. “It was really supposed to be a day to celebrate my wife.”

He had no idea that he was also going to receive an award.

Both awards came as a complete surprise to Bridget.

“I was shocked at first,” Bridget said of the award announcement.

When she went up to receive her plaque, she glanced over and saw that there was one for a separate award for her husband as well.

“That’s when I started to tear up a little bit for that because I know how hard he works,” Bridget said. “ …  It made me very thankful and very appreciative of our church and our community.”

While the award for Youth Pastor of the Year also shocked Justin, he said he was excited, and it was “humbling” to have his peers nominate him.

“It was humbling to know that your peers, people you respect and love dearly would think of you and your wife to receive this award,” Justin said. “… There are a ton of really good student pastors in our state.”

He said he was especially excited for Bridget to receive recognition because although she is not in a paid position, she is essential to the student ministry.

“I had no intention of being a student pastor at that time,” Justin said.

A little while after completing his degree, churches began contacting him about coming to lead their student ministry. When a position opened at Thorsby First Baptist, Justin applied and was selected as the student pastor.

He said he enjoys connecting with the students and their parents and developing good friendships with them.

“Seeing them grow up and own their faith, watching them become husbands and wives and moms and dads, that’s kind of the role as a student pastor, you are preparing them for that next step,” Justin said.

Bridget agreed, saying that she works with the girls  “and help(s) them grow in their relationship with Christ.”

Bridget is also the science teacher at Thorsby High School.