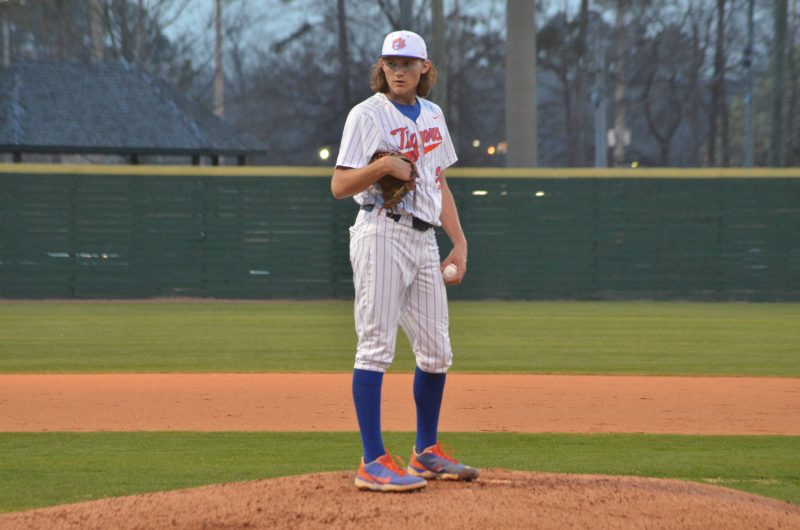 Pico Kohn threw a no-hitter in a 2-0 win over Thorsby on March 11. (ZACHARY SEIFTER/ ADVERTISER)

Pico Kohn was an unstoppable force on March 11 as he led CCHS to a 2-0 victory over Thorsby High School in the teams’ first game of the Chilton County baseball tournament.

Kohn threw all seven innings for the Tigers, allowing no runs while throwing a no-hitter in the process. He gave up just two walks on the night while striking out 15 batters.

“What can I say about Pico that hasn’t already been said,” CCHS head coach Ryan Ellison said after the game. “He’s a spectacular pitcher. You coach your whole life and a lot of people don’t see guys like him. When he’s on the mound, we’ve got a chance against anybody, and he’s got a lot of savviness, he’s a competitor. You know what you are going to get out of him, and he is really, really good.”

Kohn’s spectacular performance was needed from the Tigers, as they faced a lethal pitcher on the other side in Thorsby ace Tanner Jones. While Jones didn’t have quite the night Kohn had, he was incredible in his own right. He held CCHS to just one run in five innings pitched, giving up that run off just six hits, while walking five others and striking out seven. There were quite a few situations where the Tigers could have extended the lead, but Jones hung tough and got the Rebels out of a few jams.

“He was a great pitcher,” Ellison said of Jones. “He came out and he battled for six innings. His pitch count got up early, we put a little pressure on him, but he kept finding ways to get out of the jam … had the big strikeout when he needed it. Hats off to that guy he is a really good pitcher. You know, I say our guys had trouble getting a run in but a lot of it had to do with the arm that was on the other side, too. He was really good as well.”

While Jones was excellent, the Tigers were able to do just enough against him to give Kohn cushion for the win. An RBI single in the fourth by Brady Bolling gave the Tigers a 1-0, and they never turned back. Jones was taken off the mound in the sixth, replaced by Luke Davis, who put two batters on base before allowing Katon Elijah to get home on a wild pitch. He was taken out later in the sixth for Payton Cole who would finish the game for the Rebels.