Arrest made after police multi-agency pursuit 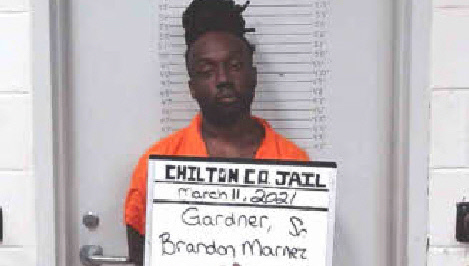 Brandon Marnez Gardner, 35, has been arrested on car theft related charges following a multiple agency pursuit though Chilton and Shelby counties.
Gardner is in the Chilton County Jail on charges of robbery (street gun), auto theft, buying/receiving stolen property and attempt to elude.
Around 8:30 a.m. on March 11, Gardner was driving on Bell Lane Road and rear-ended the car in front of him.
“(Gardner) bumped her (the victim’s car) from the back end,” Chilton County Sheriff John Shearon said. “When she got out, he produced a hand gun and said, ‘I’m taking your car.’”
Gardener headed north. One mile into Calera spikes were put on the roadway in an attempt to stop the suspect. Shearon said spikes did take out some of the tires, but the suspect continued to drive into Pelham until all the tires gave out.
After which, he got out of the car and started running. He was then arrested by law enforcement.
In addition to the Chilton County Sheriff’s Office, police departments from Clanton, Thorsby, Jemison, Calera, Alabaster and Pelham were also involved in the pursuit and arrest.
“We thank all agencies that assisted and Chilton County (911) Communications for getting everyone notified,” Shearon said.
The vehicle that Gardner was driving before he bumped into the victim’s car is suspected to be stolen from Birmingham, Shearon said. The investigation into this is ongoing.