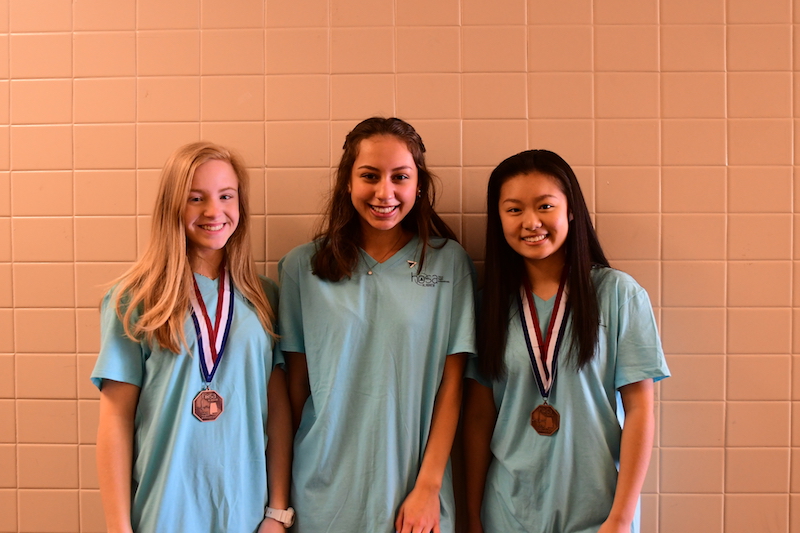 Mia Deason, Selene Sublett and Christy Xie were each in the top five in their competitions.

Xie placed third in Medical Spelling for the second year in a row. Deason placed third in Prepared Speaking, and Sublett placed fifth in Cultural Diversity and Disparities in Health Care.

HOSA is the student organization for future health care professionals.

Due to COVID-19 restrictions, HOSA competitions were held through video conferencing and video submissions.

For Deason and Sublett, it was their first time competing in the event.

“I was super, super surprised because the top three get to go to the international conference at the end of June,” Deason said.

The event will be held virtually this year because of COVID-19 concerns.

Xie said she had felt she did not do well on the final round of competition, so third place was better than she had hoped for.

“I was really bracing myself to rank lower than I did last year, but I did the same, I got third place, and I was really surprised with that,” Xie said.

Deason said her competition was essentially a speech on the assigned theme of “Unlock your Potential.”

She said she took inspiration from researching quotes.

“I practiced a lot just speaking it to my family and stuff,” Deason said.

After watching some of the other competitor’s videos, Deason did not think she was going to do well.

Sublett was drawn to the category she chose because it was something she was interested in learning more about.

Xie said she chose Medical Spelling because she had enjoyed participating in spelling bees in intermediate and middle school.

For Sublett, the competition was a multiple-choice test.

“They give you a study guide on which heritages to study,” Sublett said.

The test dealt with how different cultures approached medicine and how one’s heritage can influence health issues. Sublett prepared for the competition by taking practice quizzes.

Xie said she also took practice quizzes, and “I looked up a medical dictionary and got my sister to read them out to me and I spelled them.”

After making it through two preliminary rounds of tests, Xie spelled for the judges during a personal video conference call. Judges went down a list of words asking the spelling.

“The ranking depends on how many words you get right from the list,” Xie said

Most of the heath science students at LeCroy are members of HOSA.

Xie said she has enjoyed being a part of HOSA because “it is focused on the medical field and that’s what I what to go into in the future, so I enjoy learning about more medical knowledge and getting to know people that are interested in the same thing.”

The health science program at LeCroy is open to students to apply to in their sophomore year to attend their junior and senior years of high school.

“I’ve always really wanted to go into the medical field because that is something that I have always felt drawn to,” Deason said.

Sublett said she has family members who work in the medical field, but she began to seriously think about going into nursing last year.

“I’ve always known that I wanted to be in the medical field ever since I was little,” Xie said.

She said she has become more focused on this in recent years.