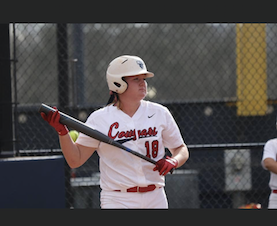 On March 3, Corbin was named the Louisville Slugger National Fastpitch Coaches Association Player of the Week. She earned the honor with her fantastic play from Feb. 24 through March 2.

In the beginning of the week, Corbin played a large role in CSU’s 22-2 blowout victory over Miles College on Feb. 24. In that game Corbin went 7-for-10 while also drawing seven walks in the game. She hit a triple and four home runs in the game, including a grand slam.

Later in the week against Shorter University, Corbin pitched a complete game in a 6-2 victory for the Cougars, their first victory of the series over Shorter. She also earned the win in the second game of the series after coming out of the bullpen in the seventh inning of a tied game to record the final out of the inning.

“Before that week, I had actually been in kind of a slump,” Corbin said. “I just remember coming before practice, before games, getting some extra work in and trying to work out of that. Then, you know, I had that week … just hard work paying off I guess.”

That hard work has been more than paying off. Corbin is third among all Division II softball players in home runs with six on the season. She also received the award of Player of the Week for the Peach Belt Conference on top of being named NFCA Player of the Week.

The hard work that went into her being able to accomplish what she has stems from influences in her life previous to her becoming a college softball powerhouse.

“I owe a lot to … Nathan Hayes, the softball coach at Jemison,” Corbin said. “I played under him for four years, and he had an impact on me, not only as a player but as a person.”

Corbin acknowledged that she would not be the same player without Hayes, or any of her other previous coaches. All of her coaches helped mold her into the dominant player she is now, and she is thankful for their lessons and influence.