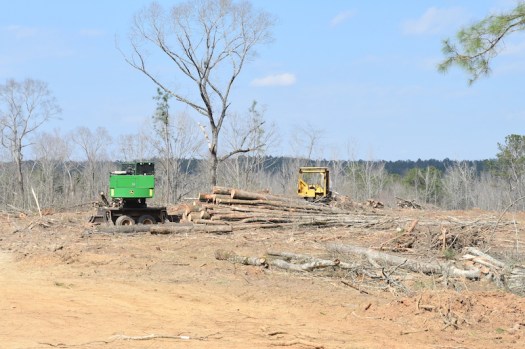 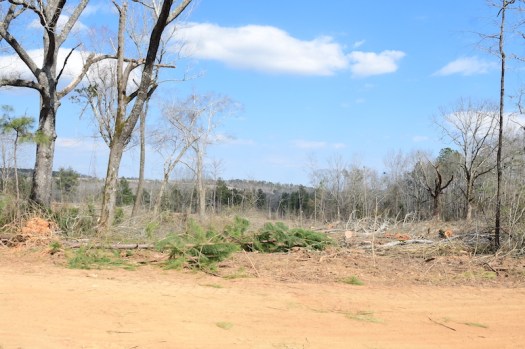 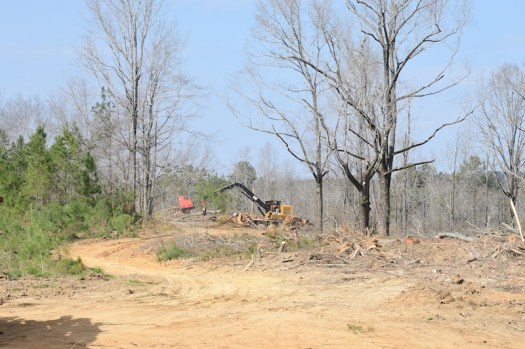 Crews had until March 31 to complete clearing the first section of timber at the site. Work will be complete on March 10. (JOYANNA LOVE/ ADVERTISER)

Excitement is building for June.

This is when all of the necessary environmental paperwork is expected to be processed for the Alabama Farm Center site, so actual dirt work for construction can begin.

Hayes said the timber in the first section on the property would be finished on March 10.

This is ahead of the expected date. The possibility of the company starting on the second section of trees, which it was planning to do in October, was discussed. The company can cut on the property until March 31, but then would have to wait until Oct. 15 because of migratory bats.

“I think they did a super job,” Hayes said.

Two representatives from Terracon brought good news about the progress of the environmental studies and obtaining the wetlands permit.

Andy Smith of Terracon said the environmental assessment was crucial in the application to the USDA for a grant for the project.

Smith said a draft document of all of the needed information has been completed.

“We expected it to go through its submittal to USDA, there will be multiple rounds of commented response,” Smith said.

After that, there will be a public comment time, which Terracon expects to be completed in May. Smith said he expects approval “around the first of June.”

Submission to USDA is expected to be completed this week.

David Dixon of Terrcon said wetlands information had been submitted, and the project would not be impacted by any changes in regulations that may be made under the Biden administration.

Two rounds of questions from the U.S. Army Corps of Engineers have been received and answered.

“We got to the finish line on that in early January,” Dixon said.

The 30-day comment period for the wetlands permit has ended without any major objections.

That was in February.

The EPA also has no further comments.

“That is the best outcome that we could have hoped for coming from the Corps,” Dixon said.

There are still three more things that need to be finalized before the wetland permit will be issued.

Dixon said it has been determined that the project would not impact any cultural sites in the area or existing wildlife. This documentation is being finalized.

Since there will be some impact to wetlands and streams in the area, mitigation plans have to be made, including documentation of impact and purchasing mitigation credits through funding a project by a mitigation bank group servicing Central Alabama. A down payment of 20% is required.

IDA Executive Director Whitney Barlow said those at the federal level have spoken highly of Terracon’s documentation on the project.

Terracon’s environmental study work on the project site began in 2019.