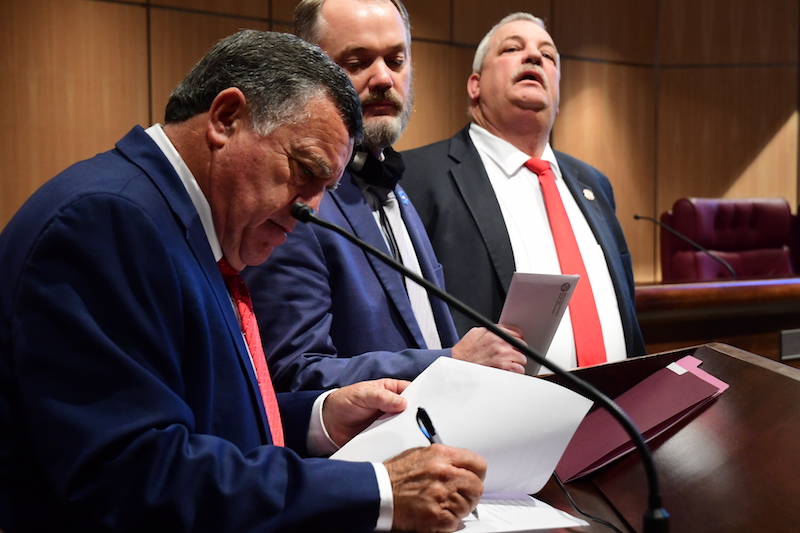 The Clanton City Council unanimously approved a limited warranty deed to transfer its portion of the proposed Alabama Farm Center site to the Alabama Agriculture and Exhibition Center Cooperative District during its March 8 voting session.

The Chilton County Commission had already approved moving the ownership of its portion of the property to the Cooperative District in a previous meeting.

The Alabama Agriculture and Exhibition Center Cooperative District will be influential in development of the Alabama Farm Center as one of two economic tools and board of directors involved in the project.

While making the motion for the vote, Councilman Billy Singleton spoke of the positive economic impact that the project would bring.

Mayor Jeff Mims echoed Singleton’s comments stating that the project was “a real big deal for Clanton” but also for Chilton County as a whole and the other city and towns in the county.

His comments were met with applause.

“We look forward to many years together making some good things happen,” Mims said.  “It is going to be a big deal for all of us.”

Parnell said the Alabama Farm Center is estimated to be a $250 million project and bring 900,000 tourists to the county.

“The City of Clanton and the County Commission and the Farmers Federation have worked diligently together to make try to this dream become a reality,” Parnell said. “As with any other project there is a process … tonight is just that next obstacles, but it is one of the few remaining obstacles that we have before we can break ground on the project.”

The project is waiting on the U.S. Army Corps of Engineer permit before being able to move forward with dirt work.

“We feel like we can build a project where we can retain who we are and still see economic growth and what I mean by who we are is that small town feel that we have so much here and that community love and involvement that we have,” Parnell said.

“We are glad to have this hurdle past us,” Helfin said.

Heflin is the chair of the Alabama Agriculture and Exhibition Center Cooperative District board of directors.

He said the project will have a positive impact throughout Central Alabama and “we look forward to bringing those 900,000 people per year to this facility. Thank you all very much.”