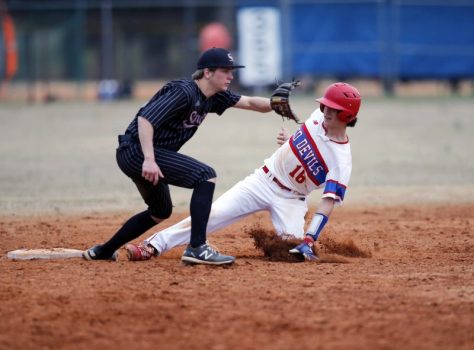 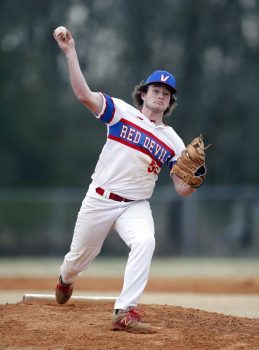 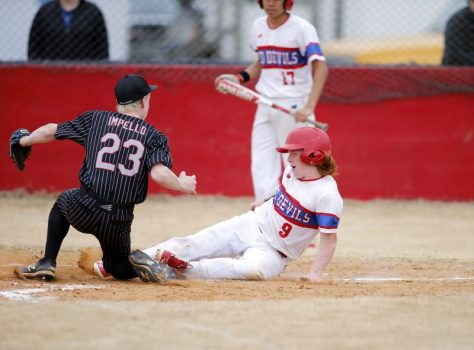 The Red Devils scored six runs in the third inning as part of a 10-5 win over Indian Springs. (BRANDON SUMRALL/ SPECIAL) 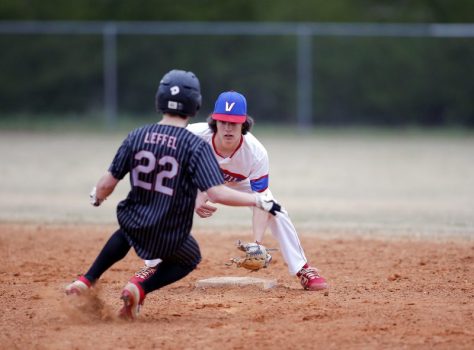 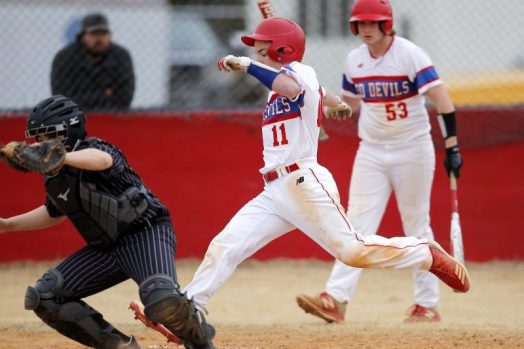 It didn’t start well, but the Verbena varsity baseball team beat Indian Springs High School on March 5 by a score of 10-5. The Red Devils were led by an opportunistic offense and starting pitcher Jarod Quinn, who pitched four innings in the win for Verbena.

Quinn had a shaky start to the game, walking four batters in the first inning and giving up two runs, one unearned. He was able to strike out three of the last four batters he faced in the inning, limiting the damage and going into the bottom of the first down just 2-0.

It didn’t take long for Verbena to respond. The Red Devils got to Indian Springs starting pitcher Sawyer Impello early. It started with a leadoff walk by Jason Barber. After a few errors and an infield single by Jonathon Marino, the Red Devils were able to even up the score 2-2 heading into the second inning.

Quinn settled down after his rough first inning. He held Indian Springs without a hit or a run in the second inning. His offense responded as a leadoff triple by Ethan Dopson opened the door for Verbena to take the lead. Caleb Short walked in his at-bat, and after a couple of wild pitches, one in which Verbena had a runner thrown out at the plate, Short was able to cash in and get home, giving Verbena a 3-2 lead after two innings.

Indian Springs responded in the third, adding runs on a 2-RBI single. Quinn was able to minimize the damage, striking out a pair of Indian Springs hitters to get to the bottom of the third down just 4-3.

In the bottom half of the inning, Verbena blew the game wide-open. A walk by Nathaniel Morris got things started, with Marino getting hit by a pitch and then Quinn driving them both home with a triple. Quinn got home on a wild pitch to get Verbena’s lead to 6-4. Verbena kept getting runners on base, and getting them to the plate, including a Dopson steal at home plate. By the end of the inning, the Red Devils had a 9-4 lead.

Indian Springs wasn’t able to generate any offense in the fourth inning, but Verbena was as they added another run to the board on a sacrifice fly by Zion Smith.

In the fifth, Quinn gave up one more run on a Drake Porter RBI single. Soon after, he reached his maximum allowance of pitches and was taken out for Ethan Hand. Hand was able to get out of the inning as Porter was thrown out at home while trying to score on a wild pitch.

Going into the bottom of the fifth, there was a huddle near home plate with the umpires and both head coaches. After about a minute of discussion, the game was called due to no lighting at the field and sundown soon approaching, giving Verbena a 10-5 victory.

Quinn was able to overcome a slow start and add a tally to his win colunm, pitching four innings, giving up five runs, four earned, off three hits with seven walks and eight strikeouts. However, it was the Verbena offense that stole the show for the night.

“I think we did a good job of getting on base to start with, being selective with the pitches we were hitting,” said Verbena coach Scott Doss. “[We] did a nice job of getting good secondary leads and reading the baseball in the dirt today, had a couple of passed balls in the dirt unfortunately, but we were able to capitalize and get some free bases on that. Then [we] got some good hitting from the lower part of the order. Ethan Dopson had a good day. So, overall I’m happy with the way we put the bat on the ball.”

Dopson was just one of many Verbena hitters that had a solid night from the batter’s box. Marino had a great day, hitting 2-for-2, while getting on a third time after getting hit by a pitch. Hand also reached base all three of his at-bats, walking twice and reaching on an error. Those three, along with the rest of the Verbena lineup were the biggest contribution to Verbena’s victory.

For Indian Springs, it was Impello who took the loss on the mound as he threw four innings, giving up 10 total runs on six hits with five walks and one strikeout.

Leading Indian Springs’ offense was Porter who went 2-for-2 with a single, double, and RBI and a walk.