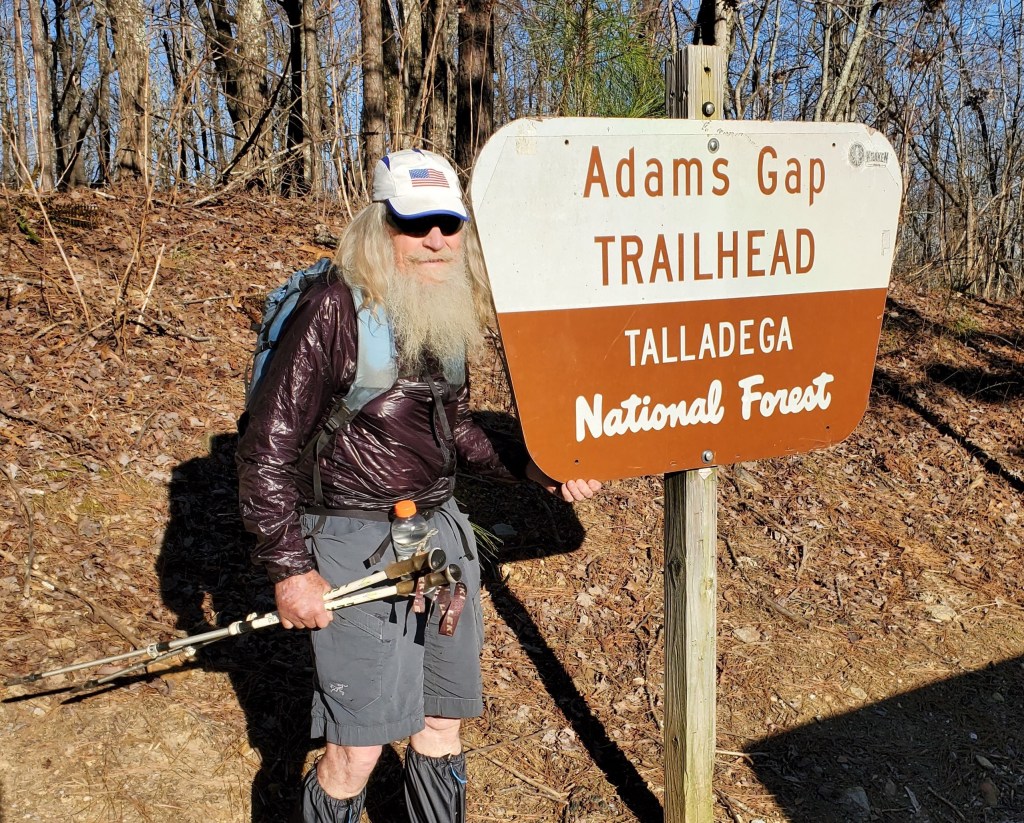 For the last several years, M.J. “Sunny” Eberhart, age 82, has been the caretaker Pinhoti’s Flagg Mountain. Many that have visited Flagg Mountain have come to love “Mr. Sunny” and the warm invitation he extends to those who are seeking respite in nature. Located just 20 miles northeast of Clanton, Flagg Mountain is the start of the Pinhoti Trail, which connects to the Eastern Continental Trail and the Great Eastern Trail. Hiking has been a passion and large part of Eberhart’s life. February of this year, Eberhart announced that he would begin hiking from Alabama’s Pinhoti Trail to Baxter State Park, Maine beginning March 1. The 2,620 mile trail will take Eberhart until the end of September to complete.

Eberhart was an ophthalmologist by profession, but in 1998, at the age of 59 he decided that he was tired of being “cooped up” indoors. He always enjoyed being immersed in nature and decided to begin hiking. On his first long-distance journey, he hiked from the Florida Keys to North Quebec, Canada (a 4,600-mile trek). In 2002, he published the book “Ten Million Steps” about his 1998 hiking experience in which he also was able to name a new hiking trail, the Eastern Continental Trail.

Since then he has hiked every national scenic trail in the United States and every historic trail (such as the Pony Express and Oregon Trail).

Nathan Wright, Eberhart’s Hiking Manager, keeps in touch with ongoing challenges and updates an online journal of Eberhart’s milestones on the website nimblewillnomad.com.

Hikers are frequently given a trail name during their journey. Eberhart goes by the name “Nimblewill Nomad” which was given to him on account of the town he was originally from – Nimblewill, Georgia.

Each post on the website gives daily updates on the progress of distance made for the day, people that “Nimblewill Nomad” has encountered and scenic photos that he has taken while on his journey.

“I spoke to him this morning,” Wright said. “Right now, he has made it to Heflin and has already hiked over 100 miles. He said that he feels great. He isn’t sore and that his reflexes are good.”

Eberhart is hiking with a full backpack which includes a tent and everything he needs to set up camp. However, Wright said Eberhart will accept kindness from strangers during his journey and might stay at a hotel or with a friend if the opportunity arises.

After Eberhart’s odyssey, which spans across 15 states, he hopes to return to Flagg Mountain, which is his favorite hiking location of those he has visited. DeForest Tuggle is the new caretaker to Flagg Mountain.

To leave a message of encouragement for Eberhart, visit www.nimblewillnomad.com. Click on “Journals” and “Leave a Comment.”