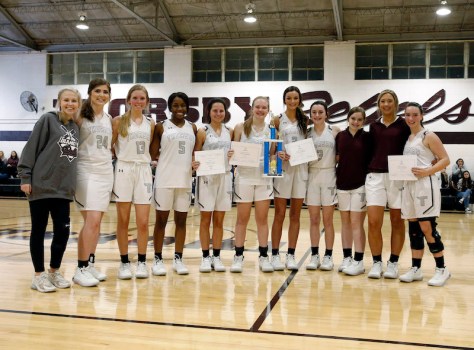 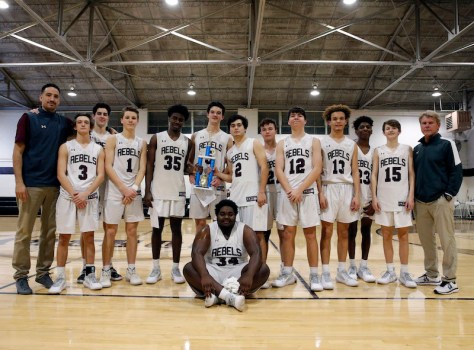 The Thorsby Rebels claimed the title of Class 2A Area 6 Champions on Feb. 12 as both squads knocked off the Isabella Mustangs. The Lady Rebels came away 59-34 victors while the Rebels Varsity Boys picked up a 76-63 win.

Carlee Wyatt showed off her skills early during Varsity Girls action as the Thorsby senior single handedly accounted for a 6-1 run that put the Rebels up early. Makayla Logan put an end to the run with a basket from downtown to cut the lead to two while Wyatt later added another basket that again put Thorsby up four. With just one tick remaining on the clock in the first period, a basket from Sadie Simon made it a two-point game after one period of play, 12-10 in favor of the Rebels.

Deasia Wilson and Amelia Fjeldstad combined to make it a 14-all game during the early moments of the second while another later from Amelia would give Isabella their first lead since early in the game. Another from Fjeldstad extended the Isabella lead to four with 3:54 to play but was answered with a basket from Lindsey Wood that started a 12-0 Thorsby run sending the Rebels to the halftime break with a 30-20 lead.

Wood and Madisyn Ellison combined early in the third period to extend the Rebel lead to 14 while four straight from Wyatt would make it an 18-point game. The big lead by Thorsby would remain intact through the 0:19 mark of the period where a basket from Simon brought an end to the third period with the Rebels holding a 44-28 lead.

Wilson cut the lead to 14 to start the fourth but with baskets by Wyatt and Emily Jones, the Rebels would surge ahead by 20. Jones would later make it a 22 point game while Wood would later extend the Thorsby lead to 25 as the Rebels would go on to cruise to a 59-34 as well as an Area Championship.

Wyatt led Thorsby with 26 points, 5 rebounds, and 3 steals while Logan and Amelia both put up 8 for the Mustangs.

It was Isabella that started varsity boys action with the hot hand as Raymond Boston and Eric McNatt combined to put the Mustangs up five early on but would be answered by a three from Luke Davis and a basket by William Stephens that tied the game at five. Thorsby took their first lead of the night on a basket from Xzavier Leverette and went on a 6-0 run. The run ended on a basket from Elijah Littlefield, but a basket by Sawyer Sellers started another Thorsby run, this time of nine. Leverette and Kohen Davis extended the Thorsby lead to 14 while baskets from Boston and Littlefield brought an end to the first with the Rebels leading 24-18.

With Thorsby holding a nine-point lead early in the second period, a basket from Sellers kick started a 13-0 Rebel run that put Thorsby way out in front, 42-20. Littlefield put an end to the Thorsby run while Anthony Fjeldstad and Dre’von Lee combined to cut the lead to 15. With the addition of four from Leverette and two more from Sellers, the Rebels took a 54-33 lead to the halftime break.

A basket by Murray and four more by Leverette made it a 25-point game while another later by Leverette and a basket by Davis put Thorsby up by 29. Littlefield would answer with a basket for Isabella and would kick off a 10-0 run by the Mustangs that made it a 17-point game after three periods of play, 65-48 Rebels.

Leverette and Mims combined to push the lead to 22 early in the fourth while a basket from Littlefield started another Isabella run, this time of nine to make it 76-63 at the final buzzer as the Rebels came away with a 76-63 win over Isabella.

Thorsby ended the night with four players in double digits as Leverette led the way with 26 while Barnett added 14 with Sellers adding 13 and another 10 by Mims. Littlefield led Isabella 19.