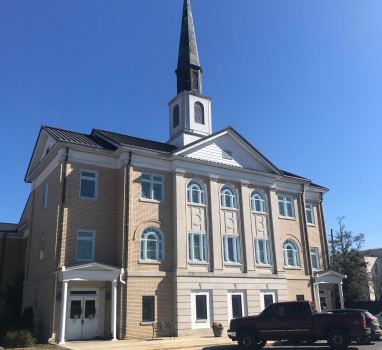 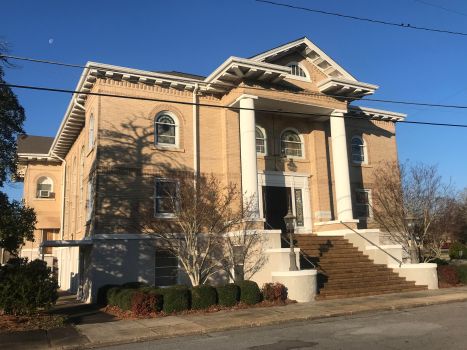 In cities across America, certain prominent buildings define the downtown districts. With the passage of generations, these structures and the memories associated with them become an important part of the identity and history of a community. In Clanton, two prominent and historic structures, the First Baptist Church and First United Methodist Church have maintained an enduring presence in the city, serving for generations as foundations of stability and beacons of hope in an often turbulent and rapidly changing world.

The memberships of the Baptist and Methodist churches were organized shortly after the founding of Clanton. Prior to the first church buildings being erected, congregations would gather in any available location. The Methodists initially met in a one-room school building located on the corner of Second Avenue and Third Street. Similarly, a history of the Baptist Church relates, “The seeds from which has grown the Baptist Church were sown by pioneer preachers in schoolhouses, vacant stores and in the Courthouse.”

During 1872-73, Alfred Baker, a Protestant Methodist preacher and founder of Clanton, donated small parcels of land to the congregations of both denominations to construct permanent houses of worship. The Baptists built a single-story wood frame building on the corner of Second Avenue North and Fourth Street. For construction of their new church, the Methodist were given a parcel of land located on Eight Street that overlooked downtown. Until their small one-story white frame building was completed, the group met under a tent erected on the site.

Attendance at religious services during the period required a sense of dedication and endurance. During the summer months, open windows and palmetto fans provided the only means of relief from the heat. With the arrival of winter, pot-bellied stoves were stoked throughout the service to keep the worshipers warm. The cleansing waters of Goose Pond Creek were used by the Baptist Church for baptisms of those who professed their faith.

In May 1888, the congregation of the Methodist Church dedicated a new church building located on the same site as their first house of worship. The new building was adorned with a steeple and bell tower. In January 1890, a committee from the Baptist Church approved the location of a new sanctuary to be built on the corner of Second Avenue North and Sixth Street on a parcel of land donated by Dr. J. S. Johnson.

These pillars of the community were again transformed beginning in February 1920 when construction of a new Baptist Church building was approved by the congregation. Completed in November 1921, the massive all-brick structure has been a principal landmark in downtown Clanton for 100 years.

Two years later, in November 1923, the cornerstone of a new Methodist Church building was carefully placed on the same hallowed ground that the Methodist Church had occupied for 50 years. Throughout their histories, both churches would continue to expand their ministries to reach those in need both in and beyond the city that has now been their home for almost 150 years.

The buildings that are the First Baptist Church and First United Methodist Church have served the city of Clanton as foundations of stability and beacons of hope through the passing of a century. Facing east, the stained-glass windows of the Methodist Church are touched by the golden rays of the morning sun while those of the Baptist Church, facing west are bathed in the softening glow of the setting sun; a daily reminder of the words of Psalm 113:3, “From the rising of the sun to its setting, the name of the LORD is to be praised.”