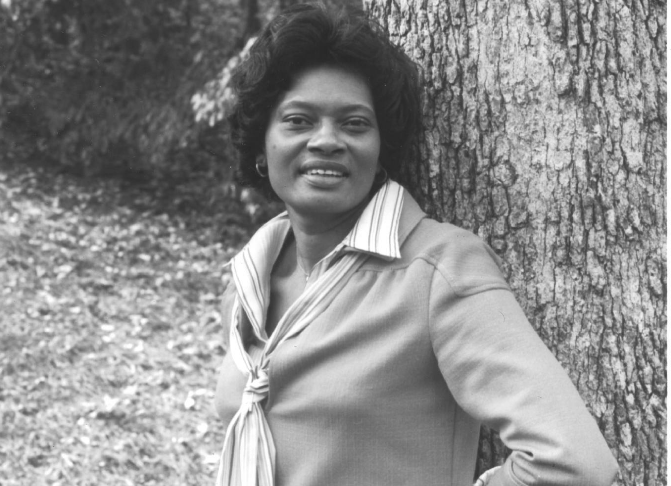 Romie McDaniel Pelham pictured in the 1970’s, when integration was introduced into Chilton County Schools. (Contributed)

During the mid-1930s, in the most rural outer banks of Verbena Romie McDaniel Pelham was born in the Mountain Creek community to Jessie and Mary Davison McDaniel. She was the 11th child born to her parents during the Great Depression.

“My parents were farmers,” Pelham said.  “We farmed cotton for income, but everything else we used for food. Hogs, chickens, ducks, geese, it’s how we lived. I worked with my father on the farm. We were partners in the field, and I enjoyed that time with him. He set an example. Whatever the task was, I did to the best of my ability. If I was cleaning cotton, I wanted mine to be the cleanest.”

From an early age, Pelham’s father instilled the importance of education in his children. Pelham and her siblings walked a mile from their home to the African-American church that was used secondarily as a school during weekdays.

“My father had an early vision of the importance of education, and that if we had a good education, one day the same job opportunities would be available to black people that they were being denied at that time,” said Pelham. “When we were older, my parents sent us to Verbena to attend middle school. There was another black church that was used as a school building for students. We stayed with my uncle that lived close to the school during the week and walked back to our (parent’s) home on the weekend, from Verbena to Marbury.”

During her childhood, Pelham and her siblings attended many different schools around the county in order to continue their education. School buses for the black community eventually became available and extended their route in order to pick up the McDaniel children at the petition of their father. Teachers and bus drivers frequently stayed at the McDaniel home because it was the end of the bus route.

Even though the McDaniel family could not afford to continue sending all of their children to county African-American schools, Pelham was able to continue her education. The Gulledge House in Verbena, the African-American church in Marbury, West End’s City School and the Chilton County Training School are some of the other schools Pelham attended during her school years.

“My father died my senior year in 1952,” said Pelham. “My mother died the following year in 1953. My brother Ellis McDaniel, who was in the Airforce, paid my tuition. I enrolled at Alabama A&M University and took a job on campus babysitting. At times, I did without food, but I continued my education.”

She later received her Master’s of Education at Alabama State in 1971.

Pelham first started her teaching career in 1958 at the African-American Jemison Elementary School.

“Schools at that time were segregated and were given second-hand resources,” said Pelham. “Sometimes the books may have pages or chapters torn out. The teacher would usually have one good copy and wrote the missing information on the board for students to copy. Especially in the school’s history class, a large part of the information had to be written.”

In 1969, Chilton County schools became integrated, and Pelham was hired as one of Verbena’s first African-American teachers.

Pelham worked together with Verbena students, Class of 1969, to form Verbena’s first Student Government Association. She retired from Verbena in 1991.

Since retirement, she has helped numerous students prepare for their GED and simulated workplace interviews at LeCroy Career Tech, helped remediate for graduation exams at county schools, worked at Chilton/Clanton Public Library and worked as a school mentor. She helped initiate the first neighborhood watch program for the West End community,

“I live daily to serve others so they can see and know Christ, especially children and those that can’t do for themselves,” said Pelham.

Pelham enjoys participating in the Alabama Education Retirees Association and attending state meetings. She is a life-long member of National Education Association. She enjoys church, gardening and spending time with her daughters: Sonya McRay, Ametria and Katrina and being with family.