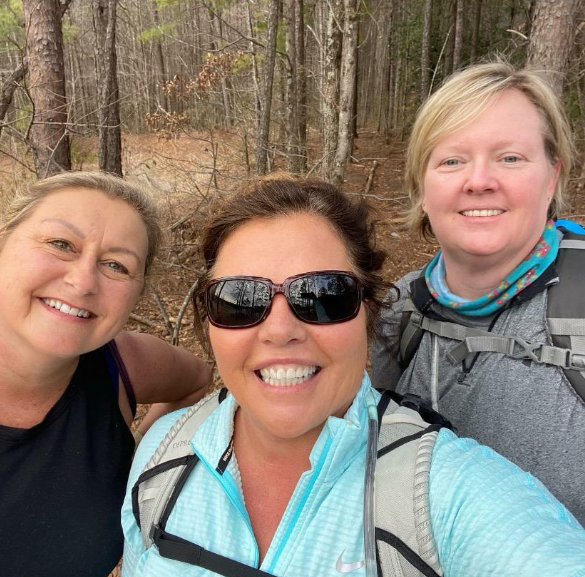 LeeAnn Ellison Moore, from left, Martie Mims and Callie Martin hiking at Red Mountain for Make-A-Wish’s Trailblaze Challenge, an event in which the team will hike 26.3 miles in a single day. Team members Cynthia Donna and Amber Corley not pictured.  (Contributed)

A group of Chilton County friends has taken on the Trailblaze Challenge, walking to bring awareness and raise money for the Make-A-Wish Foundation.

Make-A-Wish is a 501c3 nonprofit organization that helps fulfill the wishes of critically-ill children between the ages 2-18. Each year, Make-A-Wish grants 15,000 wishes nationwide. However, that number only fulfills half of the eligible requests from children. The Trailblaze Challenge helps raise the needed funds to pay for each child’s wish.

The Chilton Trailblaze group consists of Team Captain LeeAnn Ellison Moore, Martie Mims, Callie Martin and Cynthia Donna.  Additionally, Amber Corley, a friend from Vinemont, Alabama has joined the hiking group. The group has dubbed their team the “Hiking Honeys.” The group has pledged to raise $5,000 by June and hikes to raise awareness and support.

“I have never hiked or done anything like this before,” said Moore. “A friend invited us to participate. I know a few friends that have benefited from Make-A-Wish, and I wanted to give back. This also gets me out of my comfort zone.”

Ellison and the other group members hiked 34 miles during the month of January. They meet a few times each week at various parks and locations to train for the ultimate Trailblaze Challenge. Each week, they increase their hiking distance to build their endurance for the Trailblaze Challenge event at Pinhoti Trail that will be May 15.

The Pinhoti Trail is a Southern Appalachian Mountains long-distance trail. The trail is part of the Eastern Continental and Great Eastern Trails that span across multiple states. Pinhoti is the trail’s southernmost point located at Flagg Mountain, near Weogufka, Alabama.

So far, the group has enjoyed seeing local landmarks such as, Falling Rock Waterfall in Montevallo, the boulders at Moss Rock and the artifacts and displays at Red Mountain Park. However, hiking has not always been an easy climb. Moore broke her arm while hiking in January, but it has not affected her mission.

“This journey is fun and it is to raise awareness for something that is good,” said Moore. “Our group has personally witnessed children that were able to go to Disney, get a play station for their home or a pretty playhouse while being critically ill. I also want hiking to be a new love and hobby for my life. This is something I will be proud of myself for doing.”

Those wanting to donate can do so here:  2021 Trailblaze Challenge: Hiking Honeys – Make-A-Wish Foundation