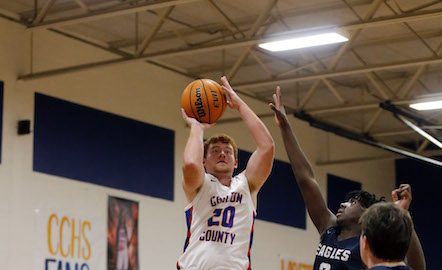 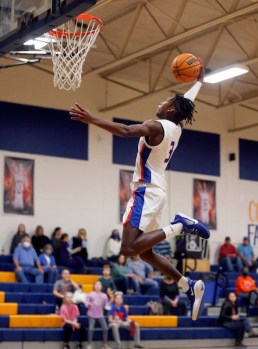 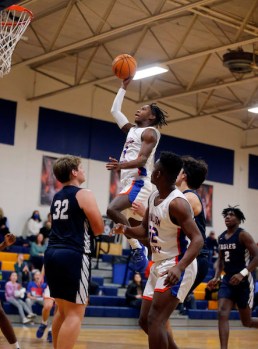 Chilton County's BJ Davis rises over the defense for a jump shot.

Chilton County's Iasia Anderson drives to the basket against an Eagles defender. 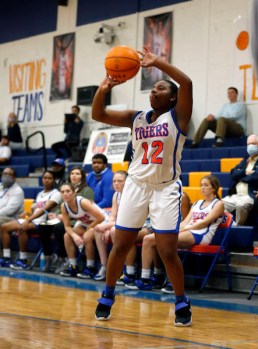 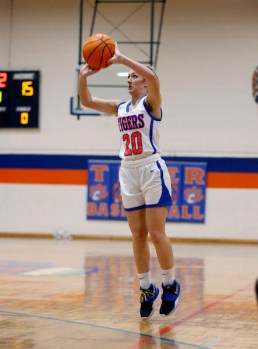 By BRANDON SUMALL/ Special to the Advertiser

The 2020-2021 home schedule came to a close on Feb. 4 in bittersweet fashion for Chilton County as the Tigers split a series with the Montgomery Academy Eagles as the Lady Tigers fell 71-35 while the Chilton Varsity boys were 68-57 victors over the Eagles.

Varsity girls action on the night began with a flourish as Iasia Anderson got things started for the Tigers but was quickly answered with a three from Madisyn Caddell for Montgomery. The slim Eagle lead remained intact until a three-point basket from Gabby Ramirez ignited a 9-0 Montgomery run. Kelsey Cleckler put an end to the run with a three of her own, but it would be the Eagles that would lead after one period of play, 19-13.

The second period of the contest proved to be the Lady Tigers undoing as a pair of lone free throws by Marlie Giles were be all the points Chilton could muster during the period as the Eagles outscored the Tigers 16-2 in route to a 35-15 halftime lead.

The third period did not get much better for the Lady Tigers as three points from Cleckler, three from Tyeshia Williams, and two more from Keyontis Dennis were not nearly enough to match the 28 points put up by Montgomery on the half.

With the game heading to the final period of play, the Eagles held a 63-23 lead.

Williams started the fourth with a three for the Tigers and would be followed by a basket from Anderson. A running clock during the final period limited both teams scoring opportunities. While the Tigers outpaced the Eagles 12-8 on the period, it would be Montgomery Academy that would cruise to a 71-35 victory over the Tigers.

Williams led the Tigers with 12 points and 7 rebounds while Chloe Johnson led the Eagles with 17 points, 4 rebounds, and 4 steals.

With the night’s action turning over to the varsity boys, a quick exchange of baskets by both teams proceeded a three from Thomas Kirkham that would give the Eagles an early three-point lead. Later with Montgomery up four, a basket from Jakeveon Bolding cut the lead to two while a three from BJ Davis would give the Tigers their first lead of the night. However, a late basket from Nigel Walker made it a 10-9 Eagles lead after one period of play.

Kirkham started the second with a basket from Montgomery, but with a three from Davis the game was tied at 12. Jamon DeJarnett followed with a basket for the Tigers that started a 7-0 Chilton run that ended on a free throw from Kirkham but was answered immediately by a five straight from Jakobe Worthy. A basket from Kirham along with a couple of free throws by Davis and Worthy sent the game to the break with the Tigers leading 28-18.

A 10-4 Eagles run to start the third period saw the Tigers lead shrink to two but was answered by baskets from Leighton Coppedge and Davis that pushed the Tigers back out in front by six. With the addition of a late basket by Ludson Lindsey, Chilton County took a 49-44 lead to the final period of play.

Davis and Bolding combined for a pair from behind the arc to start the fourth but was  answered by five straight from Montgomery to keep the lead at five. The Tigers lead faded away during the middle moments of the period as a three from Britton Kohn along with a basket from James Snead tied the game at 57. Bolding answered with a three for the Tigers while baskets from DeJarnett and Leighton Coppedge proceeded a basket from Davis that propelled the Tigers to a 68-57 victory over the Eagles.

CCHS saw three Tigers in double digits with Davis putting up 19 while Worthy added 15 with Bolding adding 12. Kirkham would lead the Eagles with 16. 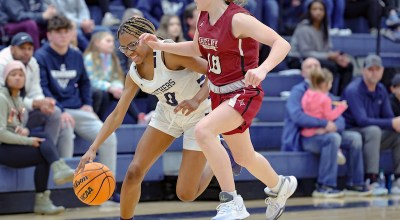 Subregional spots on the line for county girl teams