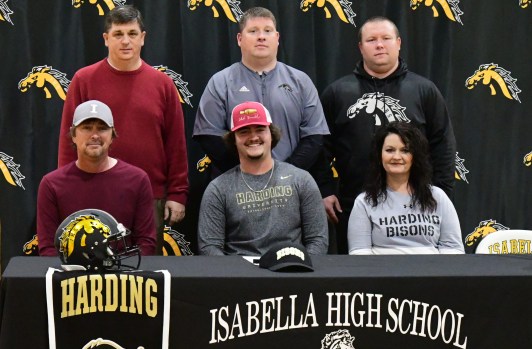 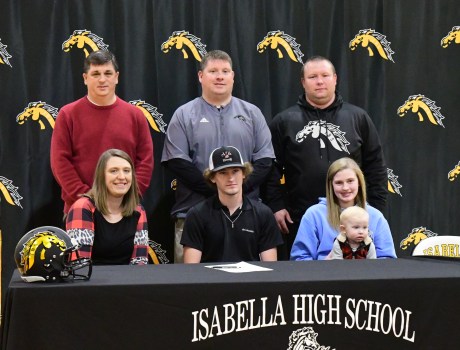 Isabella High School seniors Jack Logan and Kaleb Brasher will be continuing their football career at the next level.

The students made their team decisions final on Feb. 3 during a signing ceremony.

Logan will be joining the Chilton Prep Academy Pirates. While the team operates independent of any college, it allows college students to compete at a junior college level to continue developing their skills. Logan will be attending Jefferson State Community College.

“I am really happy for him, and I am really excited about this program because I think it is going to be good, if they continue this thing, for Isabella High School,” coach Tate Leonard said. “I think a lot of people can benefit from this program.”

Logan has played football at IHS since seventh grade. He was quarterback and one of three team captains for his senior year.

“We appreciate all his hard work,” Leonard said.

Brasher will be attending Harding University in Arkansas. He was also a team captain his senior year. He has been a starter on the team since his freshman year.

Brasher said he chose Harding because of “how welcoming the players were.” The coaches and the quality of the football team facility also made an impression. Brasher said they also made him the best offer.

“He started out as a guard, and this last year I moved him to a tight end, which a lot of people thought was stupid, but it is probably another reason why we won 11 games because we won a lot of games where he was in tight end,” Leonard said.

Leonard said Logan and Brasher always did what they were supposed to and put in the work needed to do well.

“These are examples of guys who have done it the right way, not only on the field but also in the classroom, and they have impeccable character,” Principal Ricky Porter said. “That is what it takes to get to the next level.”

He encouraged the other students present to set goals and determine the steps they will need to take to achieve those goals.