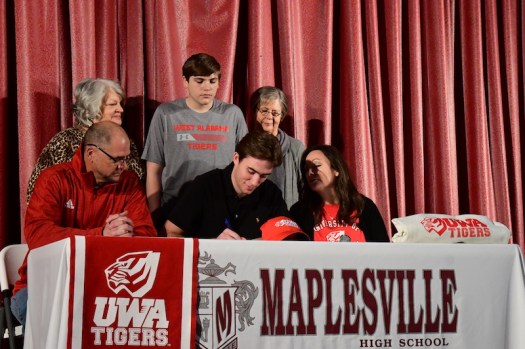 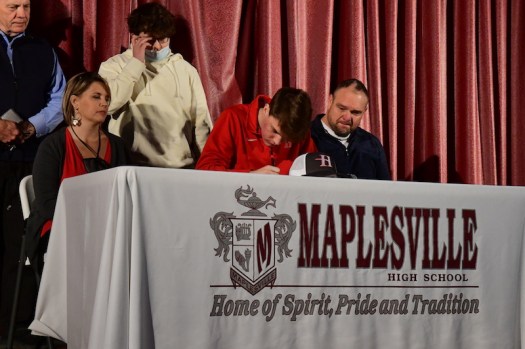 Maplesville High School seniors Jackson Abbott and Timber Lenoir made their college choices official on Feb. 3 during a signing ceremony.

Both football players thanked the MHS coaches, staff and their teammates for helping them make it to this point.

Quarterback Jackson Abbott signed to the University of West Alabama. He thanked his family and his teammates and coaches for pushing him to work hard.

“The coaching staff never took it easy on me,” Abbott said. “They always trained me well … I want to thank the University of West Alabama for giving me the opportunity to play football.”

Football head coach Brad Abbott said signing events are an opportunity for coaches to show remaining players how the hard work of those signing has paid off and “see what it takes.”

He said Jackson Abbott was an example of that “what you do matters.”

“Every time someone hit him late or trash talked him, hit him late in the pile, whatever they did to try to rattle him, he walked away from it,” Brad Abbott said.

He said coaches from other schools have asked recruiters if they were looking at Jackson Abbott because of the positive impression he has had made.

Jackson Abbott said he chose UWA because “I feel like they gave me the best opportunity” to play football and go to college while having a large portion of tuition paid for.

He said with the school’s quarterback situation, he thought he would get the opportunity to play sooner than he might at other colleges.

Brad Abbott said Lenoir could be seen many times out on the field getting in extra practice after hours.

“I want to thank everybody for coming,” Lenoir said. “It means a lot. I want to thank God first because without him, nothing would be possible, and I want to thank my teammates for pushing me every day without y’all I probably wouldn’t be where I am. Thank you for making me the player I am today.”

Lenoir said he chose Huntingdon because it “felt like a family” when he visited the campus.