Chilton County eagles on the rise 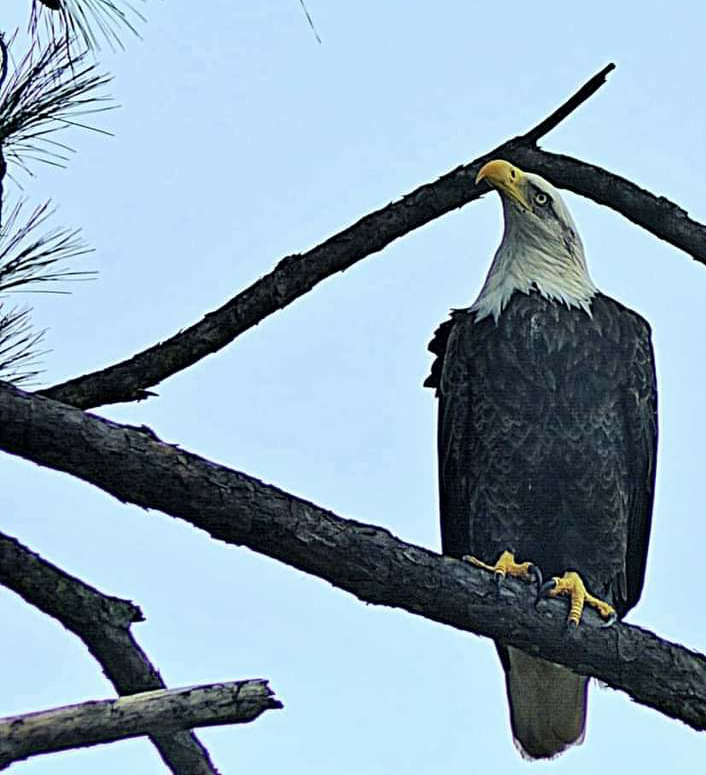 Maplesville resident Don Rucker enjoys taking photos of the family of eagles that live near his home. (DON RUCKER/ ADVERTISER)

While the national symbol and bird of the United States is the eagle, the eagle population plummeted in the last century. At the beginning of the 1900s, the eagle was a common resident to the State of Alabama until the 1960s. By 1960, eagles were no longer breeding because of the use of pesticides such as dichloro-diphenyl-trichloroethane (DDT). Eagles were poisoned when they ate DDT contaminated fish. During breeding season, the chemical affected the bird’s ability to produce strong eggshells and eggs often broke during incubation or never hatched.

In 1984, the nongame program of the Wildlife and Freshwater Fisheries Division began efforts to restore eagles to Alabama. From 1985-1991, 91 juvenile eagles were released into the wild at six different hacking towers across the state.

Hacking is a method used to simulate eagle nesting in a particular area by releasing fledgling eagles into a man-made nesting tower within the wild. The young eagles are removed from their parent’s captive nest by six weeks old so that they are not exposed to human care or associate food with humans. Identifying food with humans could risk the eaglets starving to death after their release.

The program was a success, and Alabama had its first confirmed nest in 1991.

Since then, the eagle population has been growing across the state. For many older local residents that have never witnessed an eagle in the wild, that is now a possibility in Chilton County. Three recent sightings have been confirmed in Clanton on Lake Mitchell, in Maplesville and in Thorsby.

Maplesville resident and photographer Don Rucker enjoys watching them near his home.

“I first started following them in 2009,” said Rucker. “They are still around but not as visible because of the kids being out of school this year, driving four wheelers and loud trucks.”

Eagles usually build their nests in forests and near a large body of water. Eagles return to their nest each year and have lifelong mates. The nest weighs up to 2,000 pounds. They feed mainly on fish, but also consume injured water fowl, reptiles and mammals. Their diving speed ranges from 75-99 mph and they can live to be 30 years old.

“In Alabama, we have both residential eagles, meaning they are here year-round, and migratory eagles,” said Alabama Department of Conservation and Natural Resources Biologist, Mercedes Bartkovich. “Eagles in Alabama can be seen year-round and will primarily be seen near bodies of water. With that, because their numbers have rebounded so much, it’s also not uncommon to see them in urban areas now.”

If you know of a nest location, contact Bartkovich at 334-242-3469 to help record the continued growth of the eagle population. The nongame program does not survey the state for nests, but does keep an internal database of any known eagle nests or reported nests for future reference.