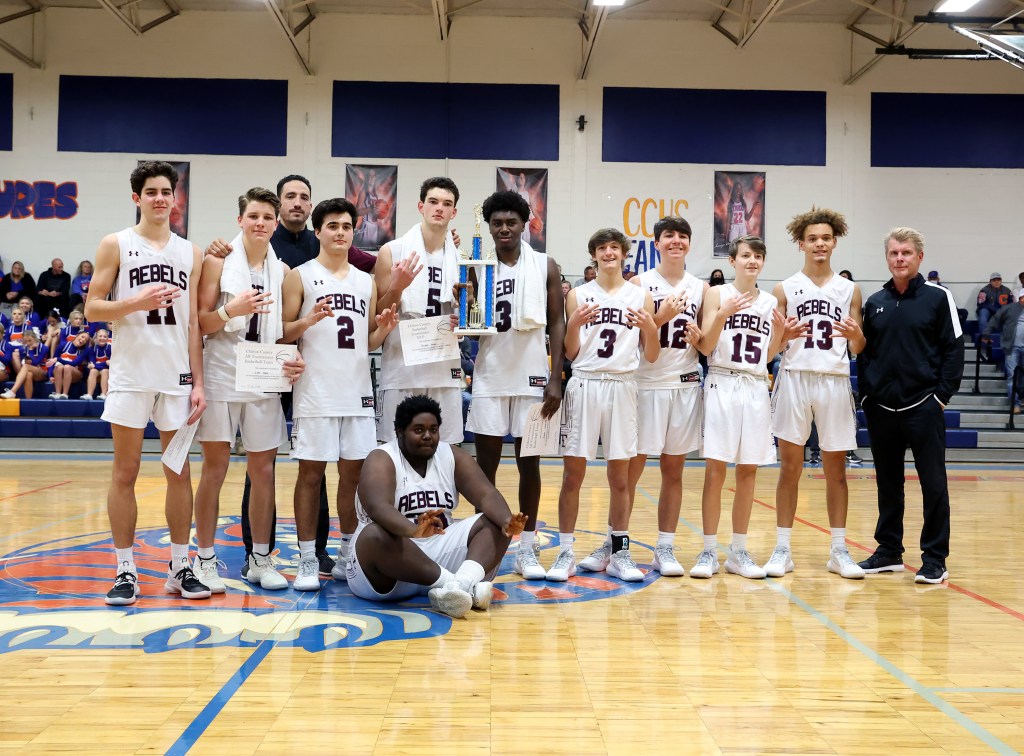 The Thorsby Rebels hold up three fingers to indicate they have won the boys basketball championship for a third-consecutive year. (Photo by Brandon Sumrall/Special)

The Thorsby Rebels are the best boys basketball team in Chilton County for the third year in a row following a 65-59 victory in a barn burner against the Chilton County Tigers on Jan. 9.

“Winning the county tournament three times, it doesn’t get any better than that,” THS senior Sawyer Sellers said.

The county tournament has a way of producing memorable contests each year, and the 2020 boys championship game will definitely be remembered for years to follow.

Sellers was named tournament MVP for the second-straight year and was the one that sealed the deal for the Rebels with four points in the final seven seconds to extend Thorsby’s two-point lead for good.

“There was no pressure,” Sellers said. “I’ve been there before.”

The game was like a prize fight with both teams trading scoring runs and clutch defensive stands throughout the night.

It was Jakeveon Bolding of CCHS, who had the hot hand early and scored 12 first quarter points to give the Tigers a 14-5 lead at the end of the first quarter. 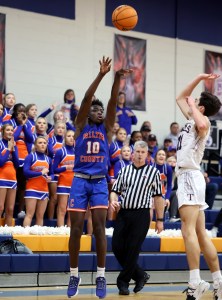 Jakeveon Bolding of CCHS led all scorers with 27 points. (Photo by Brandon Sumrall/Special)

However, Thorsby’s shooters began to find the bottom of the net, primarily Brody Mims, who caught fire with 15 second-quarter points to help erase the CCHS advantage.

“Brody kept us in it,” Sellers said.

Mims made six baskets during the Rebels second-quarter run, including three from bonus land.

“I was feeling it out there,” Mims said. “I could feel it in my wrist after I shot the first one, and I just kept shooting.”

For a stretch, it seemed like Mims could not miss and everything he shot was going in, including one three-pointer that he buried with a defender’s hand in his face.

After watching it go in, all Mims could do was smile and shake his head. 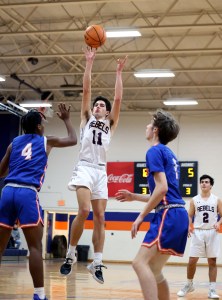 Thorsby’s Brody Mims shot lights out during the second quarter to ignite a comeback for the Rebels. (Photo by Brandon Sumrall/Special)

It is the first county title for Mims, who transferred to Thorsby this year.

“The chemistry between us is great, and they trust me to shoot the three,” Mims said.

Chandler Stevens banked in a three-pointer to beat the buzzer and tie the game at 29-all at halftime.

Thorsby took its first lead of the championship in the first minute of the third quarter and led 45-43 heading into the fourth quarter.

Bolding knocked down a pair of three-pointers in the final quarter as CCHS began to make a march toward a title and led 54-49 with 4:41 left.

Sellers was a blocking machine all night for the Rebels with eight rejections. He was a consistent factor down low and his presence alone caused shots around the rim to be altered.

In the final 4:41, Thorsby’s championship run included a straightaway three-pointer from Sellers, an inbound steal and layup by Xzavier Leverette and points in the paint by Mims.

Bolding finished with a game-high 27 points, while Mims led Thorsby with 26 and Sellers tallied 19.