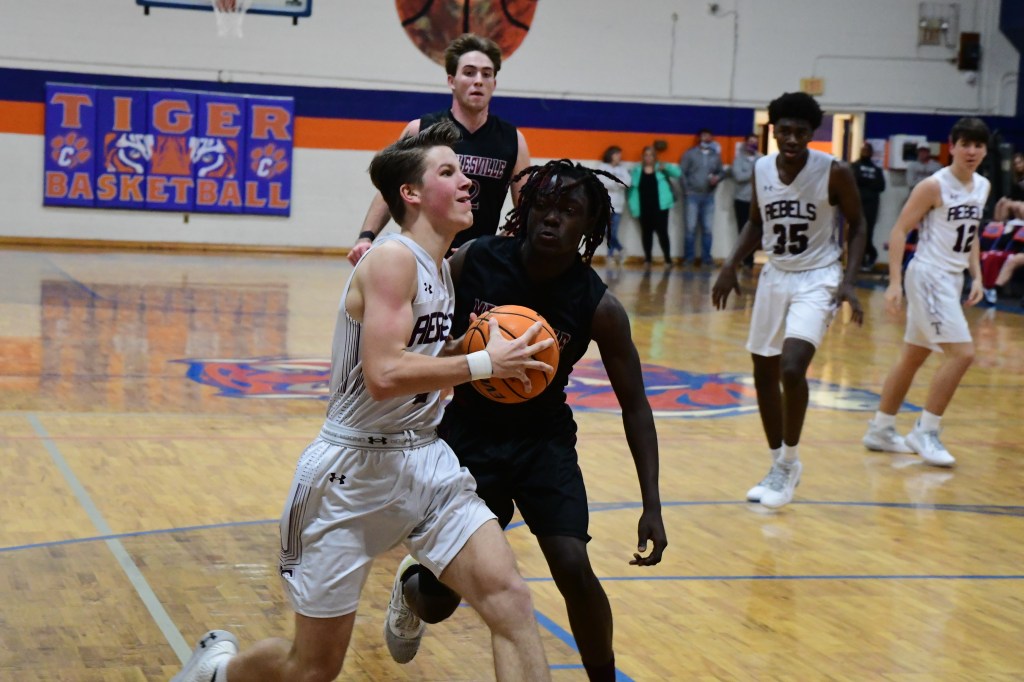 Luke Davis of Thorsby drives to the basket. He scored 17 points on the night. (Photo by Anthony Richards)

Pressure defense and ball movement offensively were the keys to success during Thorsby’s 78-53 semifinal win over Maplesville in the boys bracket of the county basketball tournament on Jan. 7.

“Tonight, was our best game,” THS head coach Russell Ricks said. “We had about three three-hour practices this week, so I felt like coming in that we were more prepared to play.”

The Rebels had an excellent night shooting the ball and the made shots allowed them to establish a full-court press that flustered Maplesville on several occasions.

“Our press was the difference,” Ricks said. “That’s something that we’ve implemented. I want to play fast, but we’ve had a couple of players injured and just haven’t had any depth. We’re just now getting it going.”

The press led to opportunities for quick points off turnovers and helped fuel the offense as a result. 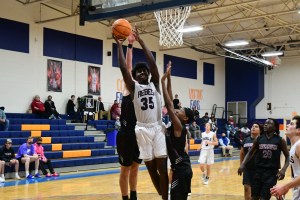 Thorsby’s Xzavier Leverette soars for an offensive rebound in the county semifinals against Maplesville on Jan. 7. (Photo by Anthony Richards)

However, setting up a proper press often depends on making shots, which Thorsby did on a consistent basis throughout the game.

“All week we were working on passing the ball and finding the open shots, because we knew they played a zone, and if we spread them out at the top, there would always be an open man,” THS guard Luke Davis said.

The Rebels were feeling it from beyond the arc with 11 three-pointers on the night, three of which were made by Davis, who finished third on the team with 17 points.

Davis was joined by Xzavier Leverette, who led the team with 21 points, and Brody Mims as two others who had a fabulous scoring night.

Leverette equaled Davis by knocking down a trifecta of three-pointers, while Mims scored 18 points and made six trips to the free throw line.

The Red Devils jumped to the early lead to start the game, but were unable to maintain it and trailed 16-11 at the end of the first quarter and 31-21 at halftime. 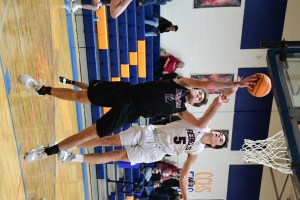 Jackson Abbott (No. 12) of Maplesville scored a game-high 26 points. (Photo by Anthony Richards)

Jackson Abbott and Latrell Wilson kept Maplesville in the game and within reach during the third quarter.

However, Maplesville was never able to get string together stops on the defensive end, which could have allowed them the chance to make a run at the lead.

Abbott led all scorers with 26 points, while Wilson added 11 points.

Maplesville’s Jakavion Jackson made a couple of acrobatic finishes at the basket and Tre’von Blackmon turned some offensive rebounds into points down low, but it was not enough as the Rebels pulled away late.

Thorsby punched its ticket to the county title game against either the Chilton County Tigers or Jemison Panthers on Jan. 9 at 5 p.m. at the CCHS gym.

The Rebels will be attempting to win their third-straight county championship.

“It (a win) would mean a lot,” Davis said with a smile on his face.