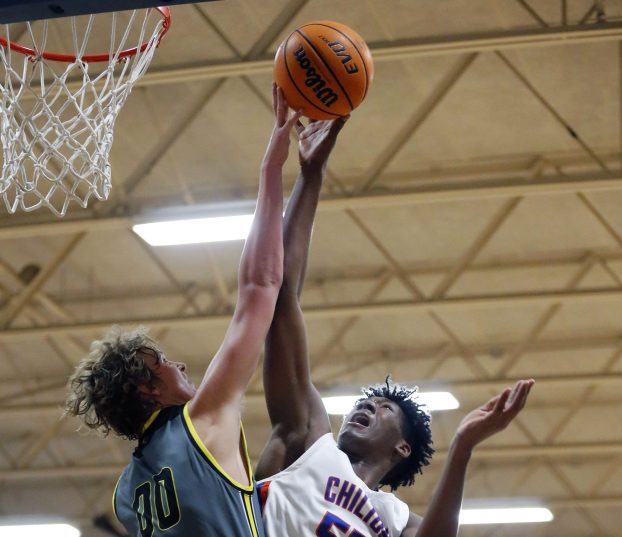 Latavion Floyd of CCHS is challenged at the rim by Isabella’s Logan Murray. However, it did not stop him from finishing with 22 points, 15 rebounds and a block in the game. (Photo by Brandon Sumrall/Special)

Chilton County High School celebrated senior nigh on Dec. 17 and was able to gift their eight seniors a pair of victories over the Isabella Mustangs.

The CCHS varsity girls won 70-42, while the Tigers varsity boys would pick up a 86-64 victory over the Mustangs.

A two-all tie would be the starting point for the varsity girls action before a basket from Marlie Giles would kick off a 8-0 run that would eventually end on a basket from Isabella’s Amelia Fjeldstad, as the Tigers held an 11-3 lead.

A basket from Gabrielle Harris would proceed as three from Iasia Anderson and a basket from Giles put the Tigers out in front by 15.

Isabella Ballew and Gracie Fjeldstad would add baskets for the Mustangs, but it would be all Chilton County with a 20-7 at the end the first quarter.

The Tigers lead would grow in the second period as an early basket from Giles would begin an 8-0 Chilton County run that would make it a 16-point Tiger lead.

A pair of threes by Makayla Logan would put an end to the run, but threes from Anderson, as well as two from the charity stripe, would see the Lady Tigers hit the locker room with a 36-23 lead.

Chilton County would continue to pull away during the third period as Tyonna Booker would get the period started with a pair of points for the Tigers.

Gracie Fjeldstad would answer with one for the Mustangs, but the basket would represent the short end of a 18-2 run for the Tigers that would put Chilton County way out in front, 56-25.

Ameila Fjeldstad would end the run for Isabella but the Lady Tigers would go to the fourth quarter with a 59-32 lead.

A quick five-point run by the Mustangs to start the final period would be answered by baskets from Kailey Sumrall and Saniya Underwood, as an 11-10 period for the two teams would do little to aid in changing the outcome of the event as the Tigers would walk away with a 70-42 victory. 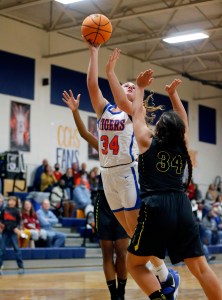 Giles led the Tigers with a career high 24 points, 16 rebounds and four steals, while Amelia Fjeldstad led the Mustangs with 13 points, 3 rebounds and a steal.

A basket from downtown along with a layup by Elijah Littlefield would start things fast for the Mustangs in varsity boys action, while Jakeveon Bolding would put the Tigers on the board with a three-point basket.

Jakobe Worthy would give Chilton their first lead of the game midway through the period and would start a 6-2 run.

Littlefield would end the Chilton County run with another basket from downtown but would be directly answered with one from Worthy.

The three from Worthy would start another Chilton run that would see the Tigers end the period on a 13-4 run that would bring it to a close with Chilton County holding a 28-16 lead.

Bolding would keep the hot hand to start the second while leading another Tiger run of eight to put the Tigers up by 18.

Littlefield and Logan Murray would combine to cut the lead to 14, while a late basket from Latavion Floyd would send Chilton County to the half with a big 44-28 lead.

The second half of the contest would begin with a three-point shooting clinic by Jake McKinnon, as the Chilton senior would drain three from behind that arc to start the period.

With the addition of another three from Matthew Ward and a basket from Kevin Staffney, the Chilton County lead grew to 30 midway through the period.

A late free throw from Murray would cut the lead by one, but it would be the Tigers that would take a 68-41 lead to the final period.

The Mustangs would win the fourth and final period by outscoring the Tigers 23-18, but it would be a big dunk by Floyd and a final score of 86-64, that would excite the home crowd and give the varsity boys a victory over cross county foe Isabella.

Brett Johnson signed a football scholarship with the UAB Blazers and made history in the process by becoming the first... read more