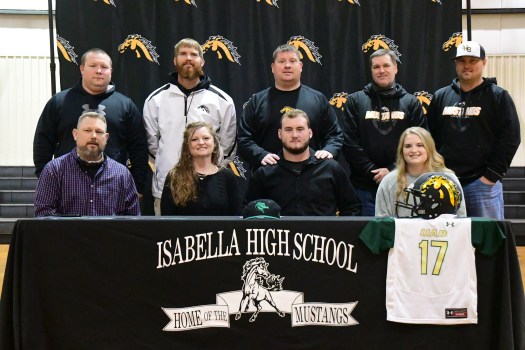 Isabella’s Brett Johnson signed a football scholarship to UAB during a ceremony on Dec. 16. (Photo by Anthony Richards) 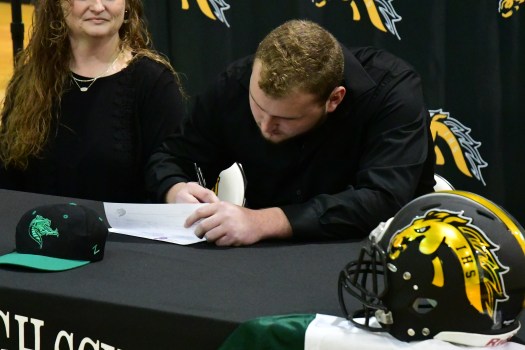 Brett Johnson chose UAB over 14 other schools that offered him scholarships. (Photo by Anthony Richards)

Brett Johnson signed a football scholarship with the UAB Blazers and made history in the process by becoming the first Division 1 football signee from Isabella High School.

“I never had to worry about him and whether or not he was going to work and be ready for the game that week,” Isabella head coach Tate Leonard said.

Isabella has only had two other athletes sign Division 1 scholarships in its history.

“He is an example of someone who has done it the right way,” Isabella Principal Ricky Porter said.

Johnson had 15 offers from college programs, which included the likes of UAB, South Alabama, Memphis, Air Force and Eastern Carolina.

He also received interest from Iowa, Tennessee and Mississippi State.

“I got calls from coaches all around the country,” Leonard said.

According to Leonard, Johnson’s family put a lot of effort and time throughout the recruiting process.

Johnson had previously verbally committed to South Alabama, but UAB was always in the mix.

However, things changed when South Alabama fired head coach Steve Campbell following the season, and Johnson was forced with an even tougher choice.

“It’s definitely a brick off my shoulders, because it’s been a lot of stress deciding which one would be the best to go to,” Johnson said. “I’m ready to get to work.”

Another factor that weighed heavily for Johnson was the winning ways that UAB has demonstrated in recent years.

“They know how to win, and I wanted to be a part of a program like that,” Johnson said.

He has gotten used to winning his share of games at Isabella and now hopes to continue that at the college level.

Johnson will look to find an immediate role among UAB’s offensive line group.

“They’ve (UAB coaching staff) been keeping up with me throughout the season,” Johnson said. “For coaches to recruit you that long, means that they really care about you.”

At 6-feet, 4-inches and 277 pounds, Johnson has a unique mix of size and athletic ability.

“Once I get up there and get on their workout program, they said that I could become a four-year starter,” Johnson said. “That’s my goal.”

Since football returned to UAB in September 2017, after a two-year absence, there has been a tidal wave of support for the program, which had not been there before.

As a result, UAB appears to be a football program on the rise and with a lot of people backing the cause with new facilities to show for it.

The Blazers will compete in their third consecutive Conference USA Championship Game, having won the conference in 2018.

“It’s definitely an upcoming program and top of the line,” Johnson said. “I just want to be part of it.”

Johnson is looking forward to helping UAB christen Protective Stadium, which will serve as the Blazers home field beginning in 2021.

“I’m looking forward to the atmosphere,” Johnson said with a smile on his face. “I think I’m going to enjoy it.”

He thanked his family and his teammates for pushing him over the years to be the player and person he is on and off the field.

“Without them, I wouldn’t be where I’m at,” Johnson said. “It’s been a grind, but also been fun.”