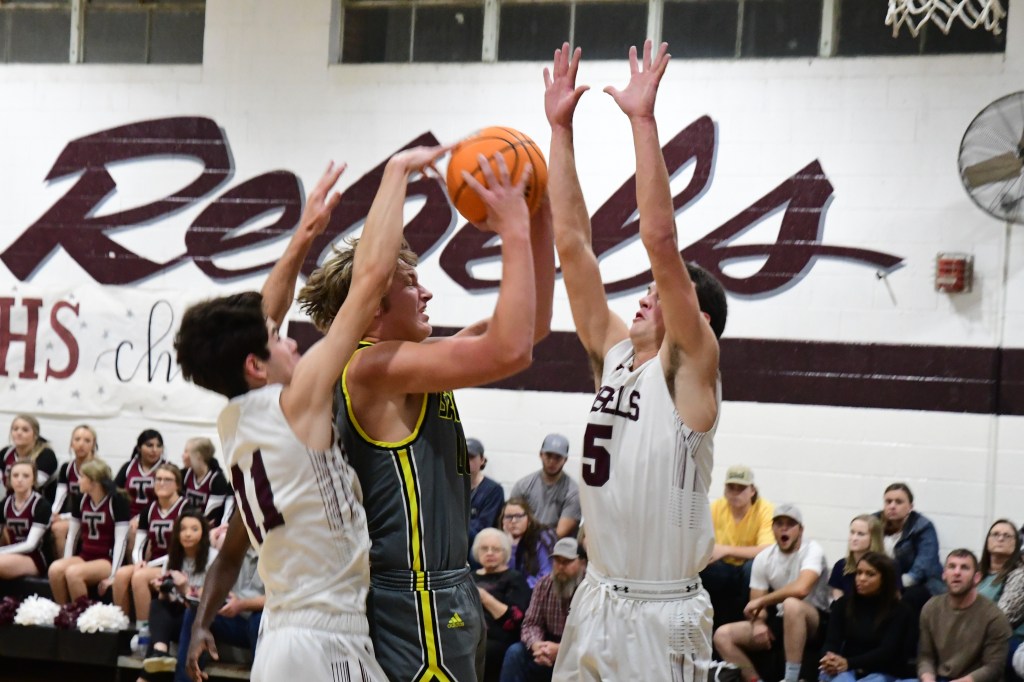 Thorsby’s Sawyer Seller (No. 5) and Brody Mims (No. 11) defend a drive to the basket by Isabella’s Logan Murray on Dec. 11. (Photo by Anthony Richards)

Sellers and Xzavier Leverette combined to account for 33 of Thorsby’s 46 points on the night.

“I’m not going to lie, it felt a little different out there knowing that it is my last year,” Leverette said.

The two are a dynamic tandem for the Rebels at both ends of the court and have been in recent years.

“I’ve come a long way over the years from being on the bench to starting,” Leverette said. “I’m always trying to just do what is best for the team.”

Sellers finished with 17 points, while Leverette added 16 points of his own.

Their size and athletic ability present matchup problems for opponents and they are the focal point of the Rebels offensive attack.

“When we’re on the floor together, we both feed off of each other,” Sellers said. 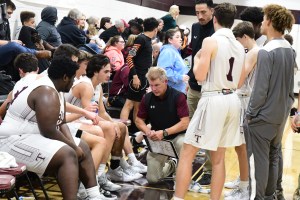 Thorsby head coach Russell Ricks speaks with his team during a timeout on senior night. (Photo by Anthony Richards)

Leverette transferred to Thorsby in 10th grade and immediately found chemistry with his new teammate Sellers.

On a night when the Thorsby offense struggled to find a rhythm, Sellers and Leverette’s point production were the difference in the game.

The two play one-on-one a lot in the Lomax Church parking lot or at the Chilton County YMCA.

“That really helps you know where the other is going to be,” Sellers said.

The Rebels knocked down five three-pointers in the game, three by Sellers and one each by Brody Barnett and Brody Mims.

Elijah Littlefield had 16 points to lead Isabella, including a 12-point first half that saw the Mustangs trailing 24-17 at halftime.

However, big man Logan Murray showed promise on the offensive end with five points, and could be someone the Mustangs build around moving forward.