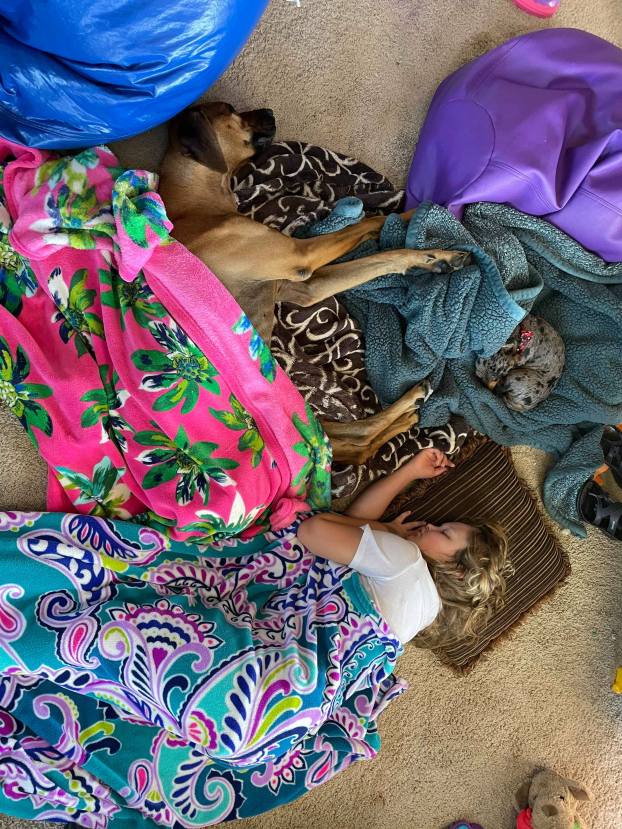 Abby, finally home after five months is receiving the best care from Blair and her sister Halle Kate.

“All I want for Christmas”

Blair, age 9, lost her dog Abby back in July.

“We came home one night and her gate was pushed open a little,” Blair said. “She wasn’t there. We looked at the pond, in the woods and trees. My parents, grandparents and all of the family searched for her. We drive around and call for her.”

Abby, a Rhodesian Ridgeback, was given to Blair by her uncle on her second birthday. The dog is now seven and has been raised by Blair.

Rhodesian Ridgebacks were originally bred in southern Africa to hunt lions. Some locals use them in the United States to hunt boar. Although many dogs are gun-shy and commonly run away on the Fourth of July when hearing fireworks, Abby is accustomed to the sound of a gun, and the family thinks that she mostly likely escaped on the Fourth of July to hunt an animal, rather than fleeing from fireworks.

Five months have since passed without Abby.

“The hardest part has been not knowing what happened to her,” said Blair’s mother, Molly Cameron. “We still drive around and call her name hoping to find her. I’ve posted her picture on social media and special Ridgeback pages hoping if someone found her that they wouldn’t sell her, that she has a home.”

On Nov. 29, Ranae Nelson of Clanton posted a photo on Facebook of a dog that had been sleeping on her porch for two days.

“My husband, Josh saw the dog on our security cameras,” said Nelson. “He ran outside to see what it was. It was dark and Josh was afraid the animal was going to kill our chickens. When he saw her up close and how bad of shape she was in, he realized she wasn’t going hurt a fly. She was just was looking for safety. He brought her onto our porch to our dog’s bed and started scrounging around for ways to warm her up. She was just so pitiful. The way she looked at me just seemed like she was so happy she had finally found a house that didn’t ‘shoo’ her away. We got her fed and watered. She was so thirsty it seemed like we were refilling her water bowl every hour.”

Because the dog was so severely emaciated, Nelson began searching for more capable hands to help the dog. She sent messages on social media to foster groups and posted her photo on social media. A friend of Blair Cameron saw the photo of the dog and contacted her. A few hours later, Blair and her father Chad went to see if the dog was Abby, and it was!

After five months and a distance of ten miles, Abby was returned to Blair. Nelson, who recorded the sweet reunion captured Abby running out to greet them, bouncing in Chad’s arms, wagging her tail and licking Blair’s face.

Since she has been back with the Camerons, Abby has visited the veterinarian’s office for a checkup. Although severely emaciated and underweight, she is in good health.

“The doctor gave us special food to give Abby and said she can’t eat too much, or she will get sick,” said Blair. “We have to feed her every 3-4 hours.”

“Since she has been home, Blair has been right by her side,” said Molly. “On the first night, Blair wanted to sleep on the floor with her in front of the fireplace. So we let Abby sleep beside Blair’s bed. She has been sleeping on Blair’s sister’s beanbag.”

The Camerons said that they are so grateful for all of the people that were kind and helped Abby on her journey.

“There was a woman in Clanton, near Lay Dam that fed Abby for a month during August, but she had to move and left Abby hoping the new tenants would feed her,” said Molly. “I am also grateful for the Nelsons who shared their Thanksgiving leftovers with Abby and were kind to her. With the recent freezing temperatures, she probably would not have made it. The vet said if it wasn’t for the Nelsons she might have died.”

Risk comes in all shapes and sizes

Are you a risk-taker? You are, you just may not know it. As human beings, I believe that each of... read more