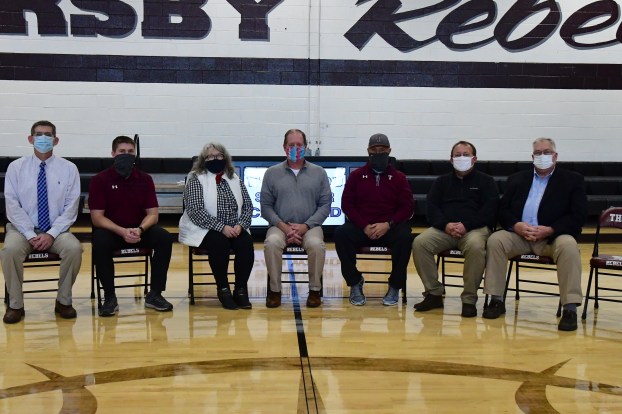 Thorsby High School was awarded $35,000 in state grant funds by Sen. Cam Ward in his final school visit as senator on Dec. 2.

Ward has been appointed director of the Alabama Board of Pardons and Paroles by Gov. Kay Ivey.

Principal Corey Clements said he only found out on Nov. 30 that the school would be receiving the funding, so specifics of how it all would be used had not been determined. However, he did say a portion would be used to replace the floor in the weight room. Coach Daryl Davis had raised $7,000 for the project and needed an additional $3,000 to fund the project.

“We will be trying to decide the best ways to be good stewards of what he has given us,” Clements said. “There are always projects and small things that need to be done.”

There are several things at the school that Ward has helped secure funding for.

Each of the elementary grades created a “thank you” card for Ward, which Clements presented during Ward’s visit.

Ward said in his time as a senator, THS invited him to come to events more than any other school in his district.

“I have always loved coming here, and I started representing Thorsby in 2010,” Ward said.

“(I have) a lot of fond memories at this school,” Ward said.

He said he knew the funds “would get used the right way” at Thorsby.

“On behalf of the Chilton County Board of Education, we appreciate you,” Superintendent Jason Griffin said. “We are going to miss you.”

Griffin said he appreciated how Ward made a point to visit and help Chilton County schools that were in his district.

Board member Pam Price said Ward always found a way to help the schools whenever asked.

Ward said it has been great to see how the community has supported the school.