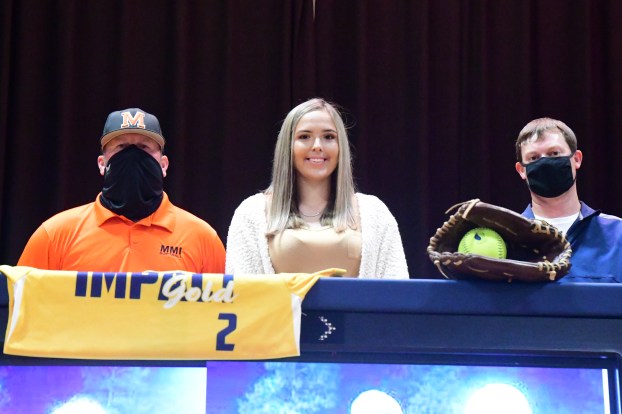 Jemison’s Kinley Bolton signed to play softball at Marion Military Institute during a ceremony on Nov. 20. (Photo by Anthony Richards)

Bolton signs to pitch at MMI

It is safe to say that Kinley Bolton of Jemison feels most comfortable with a softball in her hand staring down an opposing batter standing at the plate.

That is a major reason why she signed to play softball at Marion Military Institute during a ceremony in the JHS auditorium on Nov. 20.

“I just thank God that I can even play college softball,” Bolton said. “Softball has taught me a lot of life lessons, and it has brought me close to a lot of very important people in my life. It has made the biggest impact in my life.”

Her love for the game began at an early age as she began playing softball at 5 years old.

Bolton started travel ball when she was 10 years old and still does to this day.

“I’ve been playing every summer since then,” Bolton said.

Marion head coach Jeff Benson has developed a relationship with Bolton throughout her high school career.

According to Bolton, that definitely played a major factor in her final decision. 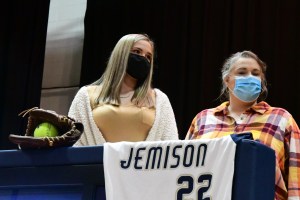 Family and friends were on hand during Bolton’s signing day. (Photo by Anthony Richards)

“One season of travel ball he even coached me, so I just feel like me and him clicked more than any other college coach I talked to,” Bolton said.

She visited the Marion campus and its small intimate feel reminded her of Jemison.

Bolton is a left-handed pitcher and is expected to have an instant contribution on the Marion softball team.

“The ability to run the ball in on a right-handed batter is what we like,” Benson said. “We think she’s got a lot of growth in her as well. We were hoping to get her, and are extremely happy to have her.”

“Over half of her outs were striking people out,” JHS head coach Nathan Hayes said. “When she’s on, she’s dangerous.”

CCHS pulls away from Panthers in second half