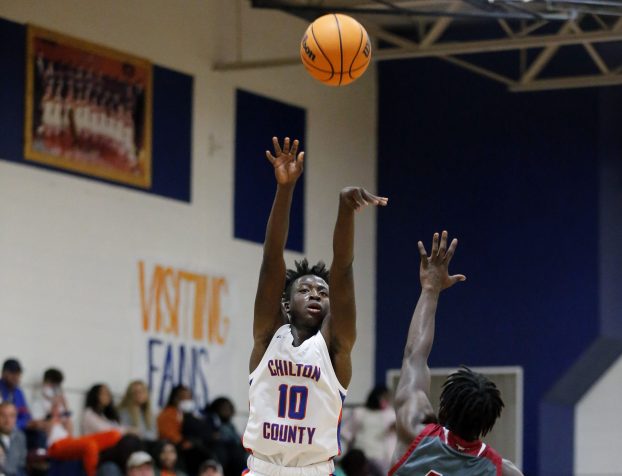 Jakeveon Bolding drops a three over a Stahope-Elmore defender on Nov. 19. (Photo by Brandon Sumrall/Special)

The Chilton County Tigers picked up a pair of wins on Nov. 19 as the varsity boys would come away with a 61-54 victory, while the Lady Tigers would notch a 59-49 win over the visiting Stanhope Elmore Mustangs.

Fresh off a huge win over the 7A Thompson Warriors on Nov. 16, the Lady Tigers would get off to a bit of a slow start against the Mustangs.

A game opening free throw from Tyeshia Williams would give the Tigers an early lead, but would be answered by a 7-0 run by Stanhope.

Marlie Giles would put an end to the run, but four-straight points from Stanhope would make it a seven-point game.

Iasia Anderson would add a late basket for the Tigers but Stanhope Elmore had a 14-6 lead at the end of the first period.

The second period would see the Tigers mount a bit of a comeback as a three from Kelsey Cleckler would cut the lead to seven, while an old-fashioned three-point play from Tyeshia Williams would make it a four-point game.

A pair of late free throws by Stanhope would help cushion their lead and sent the visitors to the locker room with a 22-19 lead.

Anderson would start the third period with a three-point basket and with a basket from Tyeshia Williams, the Tigers would take their first lead since early in the game.

A pair of baskets by Booker and Giles would push Chilton out in front by nine, while another by Booker would make it an 11-point game.

With the Tigers out-scoring the Mustangs 21-7 in the third period, Chilton would take a 40-29 lead to the final period of play. 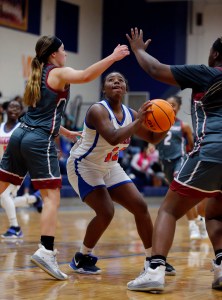 With the Tigers sporting a 15-point lead with 5:05 to play, the Mustangs would manage to only slightly cut into the Chilton County lead down the stretch as the Lady Tigers would improve to 2-1 on the season.

Anderson led the Lady Tigers with 23 points, three rebounds and five steals, while Giles added 11 points with 13 rebounds, two steals and a pair of blocks.

The Chilton County varsity boys would much mirror their counterparts as they too would get out to a slow start, as an early 5-0 Mustang run would end with a three from B.J. Davis.

Stanhope would answer with another run of six before a basket from Jakobe Worthy would bring the run to an end.

A late basket by Latavion Floyd would bring the first period to a close with the Tigers trailing 15-8.

The Stanhope lead would extend to nine early in the second before a three from Jakeveon Bolding would make it a six-point game.

A double pair of free throws by Bolding would later cut the lead to two, while a free throw by D’Kota Oden and a three from Davis would give the Tigers their first lead of the game. With the addition of a basket from Bolding, the Tigers would take a 24-20 lead to the halftime break.

The early moments of the third period would be all Tigers as a basket from Latavion Floyd would kick off a 10-0 Chilton County run that would push the Tigers way out in front, 38-22.

With the game moving to the final period of play, Chilton County held a 46-30 lead.

The Thorsby boys lost a tight one to Trinity Presbyterian School of Montgomery 55-49 on Nov. 17. The Rebels trailed... read more