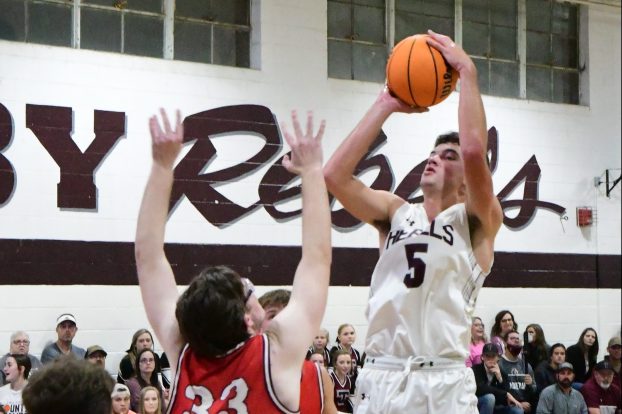 Sawyer Sellers pulls up for a jump shot against Trinity on Nov. 17. (Photo by Anthony Richards)

The Thorsby boys lost a tight one to Trinity Presbyterian School of Montgomery 55-49 on Nov. 17.

The Rebels trailed by 10 points at the halftime break and at the end of the third quarter but made several runs to cut into the deficit.

Thorsby’s scoring run was not over, as Chandler Stephens hustled and dove to the floor for a loose ball. Shortly after, a Luke Davis layup cut the deficit to three points midway through the fourth quarter.

Stephens scored seven points to accompany his hustle plays, including a three-pointer in the first half. 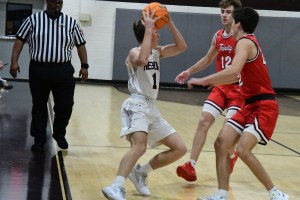 Luke Davis works to get out of a trap by Trinity. (Photo by Anthony Richards)

However, they were never able to jump out in front on the scoreboard but not without their share of opportunities down the stretch, especially from the beyond the three-point line.

The Rebels did not score another point after Davis’s layup and the scoring drought eventually allowed Trinity to extend the lead for good in the final minutes.

Sellers finished the game with 23 points, while Leverette punched in 17 points.

The Thorsby offense took a hit when Sellers was not able to be on the court in the waning moments of the game after rolling his ankle while pursuing a rebound.

“We can hang with anyone defensively,” Sellers said. “It is the offense that needs work at this point in the season.”

Sellers knows that the pieces are in place for the offense to shine, but also understands it may take some time for this year’s version of the squad to gel together.

“We improve every day at practice,” Sellers said.

According to Sellers, the team’s goals for 2020-2021 are to win a third straight county title and host a playoff game.

It was a long night for the Thorsby girls basketball team, which lost 63-19 to Trinity Presbyterian School of Montgomery... read more