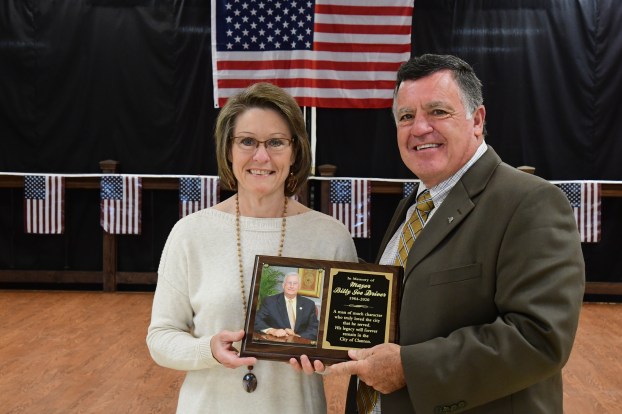 Several residents and employees of the City of Clanton came together on Nov. 16 to honor the late Mayor Billy Joe Driver on what would have been his 85th Birthday.

“It’s great to have a day like this where everybody can express their appreciation for him,” Clanton Councilwoman Mary Mell Smith said. “He just loved this city and was a 24/7 mayor.”

“Billy Joe was Clanton,” Ward said. “He represented an old-school version of how to do things. He talked to people and cared for people. He was the person we should all strive to be.”

The ceremony was highlighted by Clanton Mayor Jeff Mims presenting Driver’s daughter Kim Hayes with a plaque honoring her father.

“My dad was not big on birthday celebrations, but I know he would be proud of this one,” Hayes said.

Mims understands that he has some big shoes to fill as the one following a legend.

“This town will never forget him,” Mims said. “He’s all a lot of people have ever known.”

However, he is confident in the city’s future growth and credited Driver for putting the Clanton in great shape.

“We are the envy of a lot of little towns,” Mims said.

Mims said he was able to talk to Driver about running for mayor and got some advice, especially when it comes to the financial side of things and budgeting the money.

“I wished I would have gotten to talk to him more,” Mims said. “I thought the world of him, and he was a good man.”

According to Mims, the last time he spoke with Driver was just days before he contracted COVID-19, which would eventually lead to his death.

“We were just sitting there eating lunch and talking,” Mims said. “I was asking him things about the old water works building and told him that it would be a beautiful place for a museum or something. His eyes lit up, and he said, ‘You know that’s where my daddy worked.’ I think it made him feel good to know that I didn’t want to tear it down.”

Driver was the one that encouraged Mims to join the planning and zoning board in 2011.

“He did not turn down anybody who came in to talk with him,” Smith said. “You felt very comfortable about speaking to him about whatever. He made it that way.”

Principals of the year for District 3 named

By JOYANNA LOVE/ Managing Editor Two local principals have been recognized at the regional level as Principal of the Year.... read more