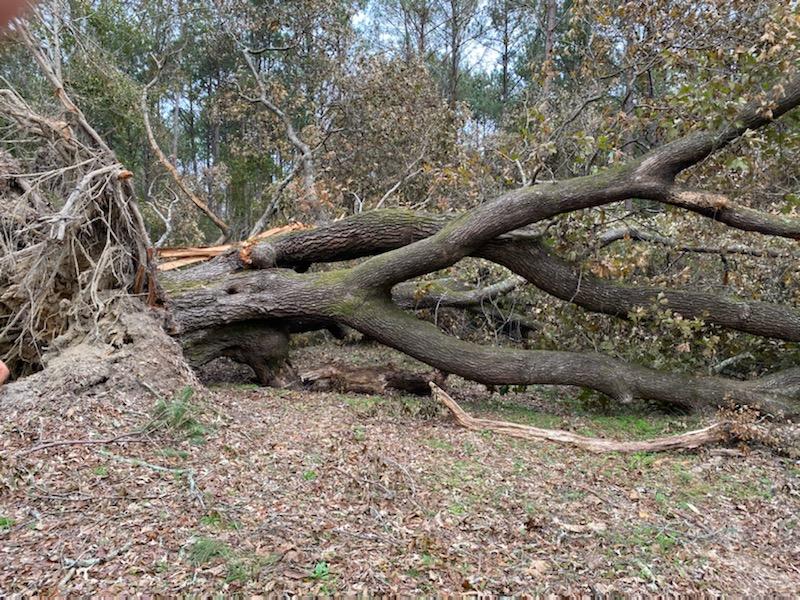 Tropical Storm Zeta knocked down a tree that had been a source of memories for Penny Deavers and her family for decades. (Photo by Chilton County Commissioner Jimmie Hardee)

Tropical Storm Zeta resulted in a lot of down trees, some of which were very old and had years of history associated with them.

One of these trees fell in the backyard of Penny Deavers’s house in Clanton.

Wayne Lewis and Commissioner Jimmie Hardee were among those on hand to help clean up the fallen tree.

“I’ve been cutting up trees for about 40 years, and I’ve never seen one this big,” Hardee said.

According to Hardee, the tree’s trunk had a diameter of about 20 feet.

Deavers said the tree is estimated to be about 200 to 300 years old.

The tree was a red oak and is said to have been there since her grandfather Grover Harris built the house in 1906.

“It was there when my mother was a child, and she would be 110 years old if she was still alive,” Deavers said. “She used to say that it was big then.”

The branches of the tree have created memories over the years for generations of Deavers.

Deavers remembers playing in a tree house when she was a growing up and all of her grandchildren have also been able to share in the tree house fun in recent years.

Over the years, the tree had been through its share of adversity, having been struck several times by lightning, but remained standing.

When the tree finally fell, it was a shock for Deavers to see it laying on the ground.

“After all it had been through, I thought nothing could ever have knocked it down,” Deavers said.

Despite the size of the tree, Deavers did not hear the tree fall from where she was in the house.

She credited the noise of the wind as being the reason why she was not able to hear it fall.

The plan is for the trunk of the tree to be placed back in its original hole.

According to Deavers, she was told by Lewis that there is a chance that the roots may retake over time and the tree may show signs of growth again.

As a result, the trunk in her backyard not only brings back fond memories of the past but also represents a sign of hope for the future.