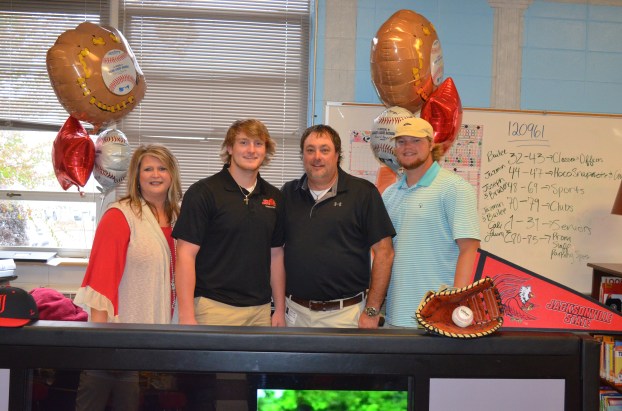 Tanner Jones was surrounded by family and friends during the signing ceremony. (Photo by Anthony Richards)

Thorsby senior Tanner Jones has been playing baseball since he was 5 years old and will be living out one of his lifelong dreams after signing a baseball scholarship to Jacksonville State University on Nov. 12.

“It’s always a good thought knowing that you’re going to play next level baseball,” Jones said. “I’m very much going to enjoy it.”

Thorsby Principal Corey Clements believes Jones to be the first Thorsby athlete to officially sign with a Division-I program in any sport.

“If you work hard, good things can happen,” Jones said. “Dream big and go get them.”

Jones has known for some time that he would signing to play for the Gamecocks.

“Their campus is nice, and I fit in a lot,” Jones said. “It’s a great baseball school, and the coaches are phenomenal. They are all a bunch of great guys.” 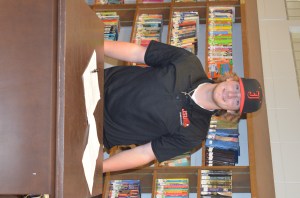 Jones donning a Jacksonville State cap shortly after signing with the school. (Photo by Anthony Richards)

He is going to pitch and be an infielder for Jacksonville State, which will give him the chance to show off his skills at the plate as well as on the mound.

“It’s always good to have two plans instead of just one,” Jones said. “I’m honored that they are going to let me do both.”

He credits Thorsby High School in helping him get to where he is today, including instilling a work ethic.

Among Jones’s memories include helping lead the Rebels to back-to-back Class 2A Final Four appearances.

Family and friends were in attendance to share in Jones’s signing ceremony.

“They’ve (parents) gave me the world, and it’s great to be able to give back to them a little bit,” Jones said. “That’s what I’m trying to do.”

His determination does not stop at playing college ball as he also hopes to one day make it to the big leagues.

The way that Chilton County elects its Commissioners could look different during the next election four years from now. This... read more