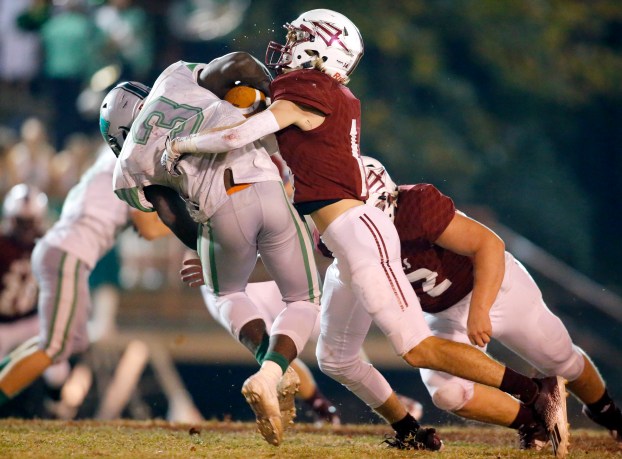 Maplesville's Timber Lenoir lays the hammer to a Millry running back. (Photo by Brandon Sumrall/Special)

With a 48-14 win over the visiting Millry Wildcats on Nov. 13, the Maplesville Red Devils punched their ticket to the quarterfinals of this year’s AHSAA 1A State Football Playoff.

The Wildcats would come away victors of the first contest of the night and would win the opening coin toss while electing to receive.

However, it would all be for not as the Red Devil defense would force a Wildcat three and out.

The Maplesville offense would use their ensuing possession to prove that they two were more than ready to play and would put running back Brady Harrison to work. Four carries and 45 yards for Harrison on the opening drive would be just the start of the evening for the Red Devil running back, as Maplesville would go 73 yards on their opening drive to take an early 7-0 lead.

Another quick three and out by the Red Devil defense would set their offense up first and 10 at their own 7-yard line for their second possession of the night.

The poor field position would do little to hinder the Maplesville offense however, as pass completions of 25 yards to Cole Gray and 32 yards to Latrell Wilson for a touchdown by quarterback Jackson Abbott would make it a 14-0 Maplesville lead still early in the second quarter.

With their defense continuing to stifle the Millry offense, the Maplesville offense would make it three in a row on their next possession as Harrison would again be the workhorse adding another 30 yards to his tally as Abbott would cap the drive with a two-yard touchdown carry to make it 21-0 at the half. 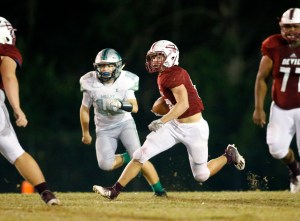 Maplesville’s Brady Harrison bursts through the Wildcat defense. He had 226 yards and a score on 22 carries. (Photo by Brandon Sumrall/Special)

The Red Devils would continue to roll to start the second half as a 32-yard scamper by Harrison along with a 22-yard connection from Abbott to Johnathon Wilson would aid in a nine-yard touchdown run by Harrison that would make it a 28-0 Maplesville lead.

The ensuing Wildcat possession would see the visitors add their first points of the night thanks to a 14-yard run by Deontae Clausey that brought the score to 28-7.

However, the Red Devils would answer right back with a 52-yard scoring drive that would end on a 16-yard touchdown pass from Abbott to Wilson that would make it 35-7 Maplesville late in the third quarter.

A pair of late fourth quarter touchdown runs by Jakavion Jackson of Maplesville and Causey of Millry would bring the game to its final score of 48-14 in favor of the Red Devils. 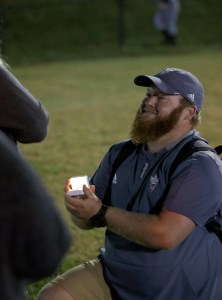 The Maplesville quarterfinal matchup will include a familiar playoff foe as the Red Devils will hit the road to take on the Brantley Bulldogs.

“We have to make sure we get some bumps and bruises healed up,” Maplesville head coach Brad Abbott said. “We have to go down there and give it our best shot. They are a well-balanced team. Good quarterback, running back, their defense is pretty solid. They are ranked No. 1 for a reason. We are going to have to go down there and play our best game all year, and that is what we plan on doing.”

Harrison finished the evening with 226 yards on 22 carries with a touchdown, while Abbott would add 158 yards through the air on 12 of 19 passing with a pair of touchdowns.

Isabella played stellar defense and Jake Logan was the focal point of the offense as the Mustangs defeated Clarke County... read more