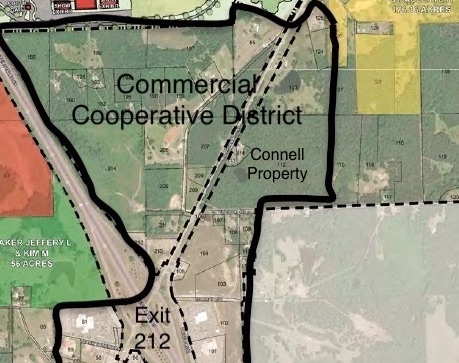 The larger of the two properties the city is looking to purchase, the Connell Property, is marked.  (Map courtesy of Chambliss King)

The Clanton City Council has approved having Mayor Jeff Mims ask for an extension on its option to purchase two parcels on Highway 145 from 30 days to six months.

The unanimous decision was made during the Nov. 9 meeting.

Both parcels are in the Clanton Commercial Cooperative District and recommended for the city to purchase in the Exit 212 Master Plan.

Councilman Billy Singleton asked for reassurance that the city’s plan for the property has remained the same.

He said an environmental study on the property had not been done and this would give the city time to do that.

The plans to purchase and develop the property remain in place.

Also during the meeting, the Clanton Fire Department presented a demonstration of its STRYKER equipment to the Council and residents present. The department will receive reimbursement for the $15,000 piece of equipment through the CARES ACT. The device provides CPR chest compressions and was described by the department as being like having another person at the scene.

It was determined that the on-call procedure for the water department, which would establish a schedule for who handles after-hour calls and compensation, would need to be considered by the Utility Board.

Work sessions for the Council will now be held at 5 p.m. in the Mayor’s office (on the second floor of City Hall) on the Thursday prior to each Council meeting. Work sessions are open to the public under the Open Meetings Act. However, the Council cannot vote on anything during a work session.