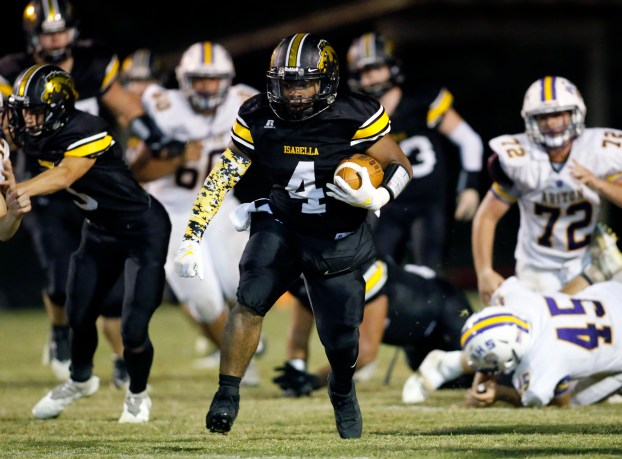 J.J. Wilson led Isabella to a first round victory with 122 yards on 22 carries. (Photo by Brandon Sumrall/Special)

Mustangs ground out victory against Ariton

With a hard fought 13-7 win over the Ariton Purple Cats on Friday night, the Isabella Mustangs will advance to round two of this year’s 2A AHSAA State Football Playoffs.

If nerves were a factor for Isabella, it certainly did not show with the Mustangs opening drive as the home team elected to receive the opening kickoff and would go to work with their offense at their own 42.

A big run by J.J. Wilson of 26 yards would move the Mustangs down inside the Ariton red zone, where four plays later on a fourth and three at the six, Wilson would find pay dirt to put the Mustangs up 6-0.

With Jake Logan adding the PAT, Isabella would post a 7-0 lead midway through the first quarter.

The ensuing possession by the Purple Cats would look promising early thanks to a 21-yard run by Ian Senn, but a second down play near midfield would result in a fumble that would be recovered by Isabella that would set the Mustangs up first and 10 at the Ariton 49.

Defense would become the name of the game through the remainder of the first quarter, as well as the early moments of the second, but it would be a special teams play that would give Ariton their first points of the night.

With a fourth and 26 at their own 39, a Purple Cats punt would roll dead inside the Isabella six-yard line.

With Isabella unable to advance from deep inside their own territory, a Mustangs punt would set Ariton up first and 10 at the Isabella 26.

One play later, Jordan Smith would bust through the middle of the Isabella defense and would go 26 yards for an Ariton touchdown. With the PAT, the score was tied at seven midway through the second quarter.

With the ensuing Isabella possession netting no points for the Mustangs, the Isabella defense would stuff a fourth and one near midfield to set up the Mustang offense at the Ariton 46.

One play later, quarterback Jake Logan would connect with Braxden Giles across the middle for a 46-yard touchdown pass that would send the game to the halftime break with Isabella holding a 13-7 lead. 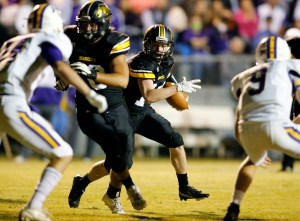 A three and out by the Isabella defense to start the second half would set their offense up with their first possession of the half at their own 18.

The Mustangs would drive out to near midfield where a fourth and five pass attempt by Logan would fall into the hands of a Ariton defender and would be returned down to the Isabella 25.

The Mustangs would be forced to call on a defense that had been stingy all night to once again answer the call, and with four consecutive stops inside their own five-yard line, the Purple Cats would be turned away empty handed.

Ground and pound would be the theme of the ensuing Isabella drive as Wilson, Logan, and Zac Chapman would run down the heart of the Ariton defense.

Five yards, 10 yards, even 20 yards at a time, the Mustang offense appeared to be well on their way to another scoring drive.

However, with a first and 10 at the Ariton seven-yard line, four consecutive runs by the Mustangs would see Isabella come up inches short on a fourth and one at the one, which turned the ball over to the Purple Cats with 2:56 remaining.

A pass attempt would later be picked off by Austin Jones and would seal a first round win for Isabella.

“We knew it was going to be a tough game, but every week we are playing for a state championship and that was our mindset,” Isabella head coach Tate Leonard said. “We wanted to be the most physical team and at the end of the day we were. That is what got the victory. We could have done some things better but right now I don’t care if we win one to nothing as long as we win and move on to the next round.”

Wilson led the Mustang rushing attack with 122 yards on 22 carries and a touchdown, while Chapman added 54 yards on 11 carries.

OPINION: Volleyball: a sport without a home

I feel bad for the sport of volleyball, because the girls that play it work so hard and it really... read more