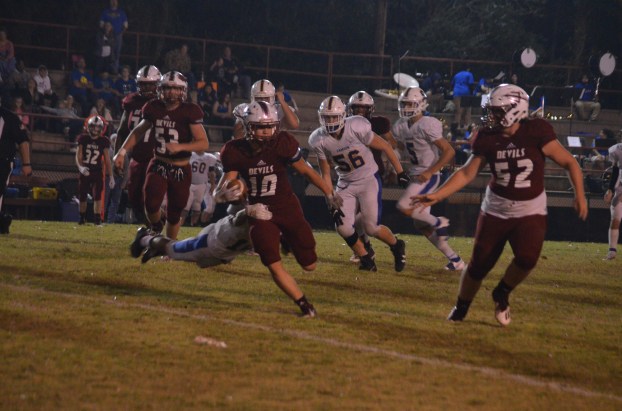 Brady Harrison (No. 10) breaks a tackle and gets blocking help from Jacob Johnson (No. 52) against Samson in the first round on Nov. 6. (Photo by Anthony Richards)

Maplesville impresses in first round shutout

The Maplesville Red Devils handled business in the first round of the Class 1A playoffs with a resounding 41-0 victory against Samson High School on Nov. 6.

The Red Devils consistently moved the ball from the start and Samson struggled to do the same against a stingy Maplesville defense.

Jackson Abbott threw three touchdowns on the night and also ran for a long score on a designed quarterback keeper in the second quarter.

Two of Abbott’s touchdown tosses were to Evan Harrison, who gives the Red Devils yet another weapon in the passing game.

“I feel confident in all of our receivers,” Abbott said. “It really is just next man up. When one of our receivers goes down, someone is right there to step up and make big plays.”

According to Abbott, it is good to know that he has options to throw to when standing back there in the pocket.

It was a productive game for the Harrison family, as Evan Harrison’s cousin Brady had his way on the ground and also scored a touchdown from his running back position. 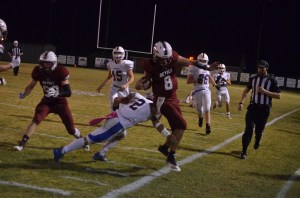 Jackson Abbott heads out of bounds at the end of a long run. (Photo by Anthony Richards)

“It really helped us out once Brady started carrying the load at running back,” Abbott said. “He didn’t even play running back the first two games of the season, but he’s already got like 13 touchdowns. He’s tough and a hard worker.”

Taylor Sheffield had a big game on the defensive side of the ball.

However, it was not just the middle linebacker’s hard hitting that stood out, but also his knack for making plays on the ball with a fumble recovery and an interception.

Latrell Wilson also picked off a pass on Samson’s opening drive of the game.

Samson played three different players at quarterback in the first half but they were unable to solve the riddle that was the Maplesville defense.

“Every game we come into it preaching about getting a goose egg, which is what we call it,” Abbott said.

Maplesville jumped out to an early 14-0 lead at the end of the first quarter and led 34-0 at halftime. A running clock was put into effect for the second half.

“We’re just taking it one game at a time,” Abbott said. “With our last regular season game getting cancelled, we weren’t really sure how we would come out, but I think we came out very strong and it was exciting to see.”

Mustangs ground out victory against Ariton

By BRANDON SUMRALL Special to the Advertiser   With a hard fought 13-7 win over the Ariton Purple Cats on... read more