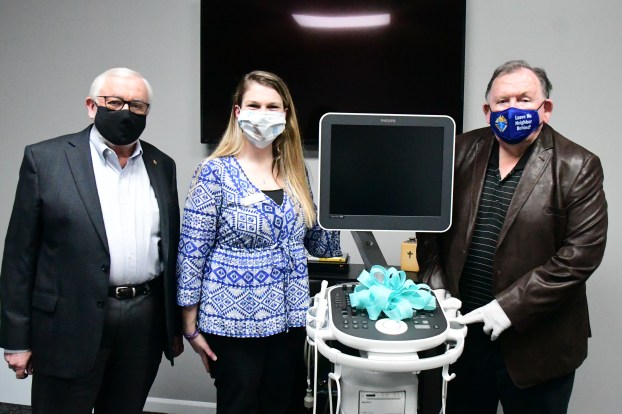 Chilton County Care Net Director Ashley Liveoak stands next to the facility’s new ultrasound machine, which was purchased and donated by the Knights of Columbus. (Photo by Anthony Richards)

Care Net hopes to save lives with new ultrasound

The Care Net Pregnancy Resource Center of Chilton County received a new ultrasound machine thanks to a partnership with the Knights of Columbus.

Liveoak searched around for organizations that could offer a grant to help pay for a new machine.

According to Liveoak, she was beginning to get discouraged after being turned away by several organizations.

That is when the Knights of Columbus stepped in and offered to do what it could to help the cause by purchasing a new ultrasound machine for $27,000 and donating it to the facility.

“All I did was pick up the phone, and God opened every door for us to get this machine,” Liveoak said. “It was a sign from God.” 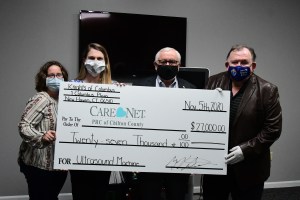 The ultrasound machine cost $27,000 and will replace the old machine, which was 10 years old. The old machine will be sent to a medical clinic in Haiti. (Photo by Anthony Richards)

The Knights of Columbus was founded in 1882 as a global Catholic charitable organization.

According to George Vernon Gentle, state life director with the Knights of Columbus, despite Catholics only making up less than 10% of Alabama’s pollution, the Care Net ultrasound machine will be 35 machines that they have donated across the state in recent years and a little more than 1,100 across the world.

Once the money was in place, it took about a month to get the machine ordered and delivered.

Care Net is an organization that focuses on providing resources to pregnant women and making sure they know all of their available options other than abortion.

According to Liveoak, the ultrasound machine will play an instrumental role in helping decrease the number of expected mothers who choose to have an abortion.

“We are here to let it be a window to the womb, and to save any babies where their moms might be abortion-vulnerable,” Liveoak said. “Statistics show that if a mother sees the baby in the womb, they are 80% more likely to choose life.”

The ultrasound machine the facility had been using will be sent to a medical clinic in Haiti to further assist doctors and pregnant women in the country through a partnership with Children’s Hope ministry in Montgomery.

By JOYANNA LOVE/ Managing Editor In the aftermath of Tropical Storm Zeta, downed trees and lack of power created a... read more